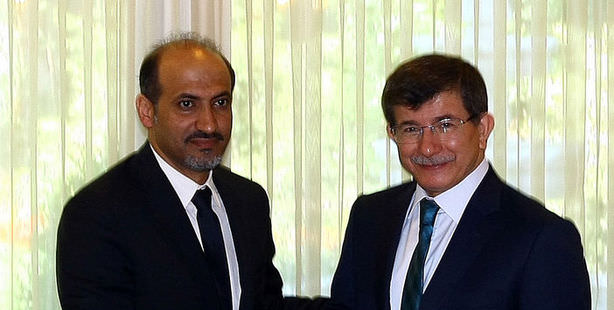 Hosting the new leader of the Syrian opposition Ahmad Jabra in Ankara, Foreign Minister Davutoğlu stated, “A transition towards public will would truly qualify as a reason to rejoice.”

During a meeting with the new Syrian National Council leader Ahmad Jarba, Foreign Affairs Minister Ahmet Davutoğlu expressed his desire that the misery endured by Syrian nationals come to an end during the holy month of Ramadan and for peace to be restored.

"We hope that during this month of Ramadan, at the very least the weapons and bloodshed will come to a halt and all sides will mobilize in order to instill permanent peace. A transition towards public will would truly qualify as a reason to rejoice," said Davutoğlu.

"Hopefully this Ramadan will be the last Ramadan in which our Syrian brothers experience pain and suffering. Hopefully in the shortest time possible and with the abundance of Ramadan, unity and solidarity will prevail amongst our Syrian brothers and the much needed political transition will transpire according to the public's demands and your demands," said Davutoğlu, adding, "This would ensure peace prevails in Syria."

Emphasizing that Turkey will always stand by the people of Syria under any circumstance, Foreign Minister Davutoğlu reiterated that they consider the National Coalition for Syrian Revolutionary and Opposition Forces to be the sole representative of the Syrian public. Davutoğlu also expressed his sincere wish that the Syrian refugees who will be celebrating their third Ramadan in Turkey will be able to return to their country and their homes as soon as possible so they can celebrate the holiday in their homeland. A transition towards public will would truly qualify as a reason to rejoice."

'WEAPONS SHOULD BE SILENCED'

Noting that this visit with Davutoğlu was his first since taking office as President of the Syrian National Council, Ahmad Jarba stated, "I want to extend our gratitude to the Turkish government and public. You never left us alone during these trying times." Jarba cited the hospitality of the Turkish government and the Turkish public to the people of Syria as being a great example of nobility and stated, "For many years there has been a closed door to the Arab and Islamic world. This era lasted approximately 40 years. However, thanks to the President, the Prime Minister and all of you, Turkey has now opened that door after 40 years' time."

In an announcement made following the meeting, the newly elected president of the National Coalition for Syrian Revolutionary and Opposition Forces (SNC) Jarba stated, "The people in Homs are fighting a war for humanity. We demand a halt to the fighting in the holy month of Ramadan."

"SYRIANS WILL NOT BE ALLOWED TO VOTE IN THE ELECTIONS"

During a parliamentary session also held on Tuesday, Foreign Minister Davutoğlu responded to a question of whether the Turkish government was considering providing identity cards to Syrian refugees and if that would grant them the right to vote in local elections. "We are not planning on issuing refugees identity cards (similar to the Turkish 'nüfus cüzdanı'); we will be giving them cards that contain their identification information. However, there is no way they will be allowed to vote in the local elections with these cards," stated Davutoğlu, adding that there are presently over 200 thousand Syrian refugees staying in shelter centers.