Ramadan: Starving the body to feed the soul 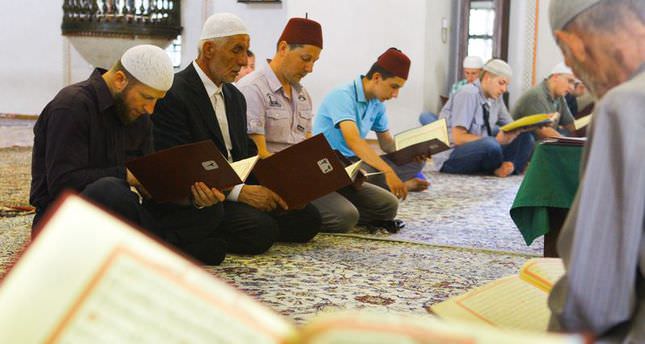 by Daily Sabah Jun 27, 2014 12:00 am
Ramadan is the ninth month of the Hijri (Islamic Lunar) calendar when Muslims throughout the world try to fulfill one of the five pillars of Islam through not only fasting but recharging and reviving their faith to become better human beings. They stop eating at dawn and end their fast at sunset, which could greatly vary according to where one lives and the period when Ramadan arrives. The Holy Qur'an was revealed to Prophet Muhammad (Peace and Blessings be Upon Him) during Ramadan: "The month of Ramadan is that in which was revealed the Quran; a guidance for mankind, and clear proofs of the guidance, and the criterion (of right and wrong). And whosoever of you is present, let him fast the month… Allah desires for you ease; He desires not hardship for you; and that you should complete the period, and that you should magnify Allah for having guided you, and that perhaps you may be thankful (Chapter 2, Verse 185)

The word "Ramadan" means to burn in Arabic, and it is expressed that the sins of Muslims who fast and beg Allah's forgiveness during this month will burn away and perish while it is stated that Ramadan is the month when the devil is locked up: Abu Hurairah, (may Allah be pleased with him) quoted the Prophet (PBUH) as saying: "When the month of Ramadan comes, the gates of Paradise are opened and the gates of the Hellfire are closed, and the devils are chained." (Reported by al-Bukhari)

Because of its nature, Ramadan is considered to be the holiest of the months as Muslims are encouraged to worship, pray, remember God, give charity and do good to people and are promised to receive double the rewards in the hereafter. For instance, one who fulfills a religious duty during this month is promised to receive seventy times of the rewards. Accordingly, Muslims are encouraged to make the best of this month by not only starving their bodies but nurturing their souls through constant worship, containing their anger, helping the needy and being patient to please Allah. They are advised to stay away from committing all sorts of sins not only through actions but through words and ears too. This is one of the reasons why scholars always emphasize the fact that fasting is not about starving one's body but it is about controlling one's desires and thanking Allah for what one has.

Ramadan is a month when those who enjoy tremendous blessings get a chance to sympathize with the less fortunate throughout the world who cannot afford to feed themselves and reflect upon their duties as a Muslim to give zakat (charity) to the poor. Ramadan is the month when Muslims strive to redirect their hearts from worldly activities to religious devotion, in efforts to purify their souls to become better human beings.
Last Update: Jun 27, 2014 9:57 pm
RELATED TOPICS