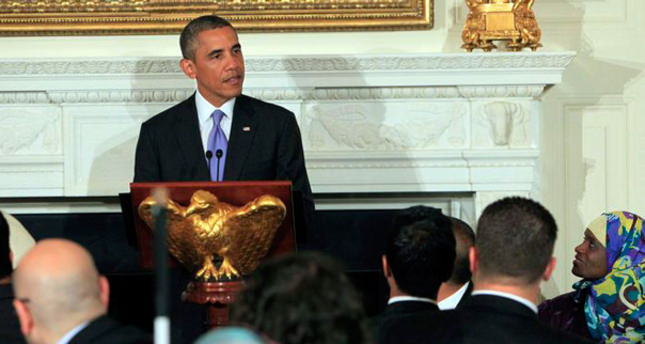 by Anadolu Agency Jun 29, 2014 12:00 am
U.S. President Barck Obama has issued a message to American Muslims and Muslims around the world congratulating them on the start of the holy fasting month of Ramadan as a time to remember the poor and the needy and to share responsibilities.

"On behalf of the American people, Michelle and I extend our best wishes to Muslim communities here in the United States and around the world on the beginning of the blessed month of Ramadan," Obama said in a message published by the White House Office of the Press Secretary on Friday, June 27.

"A time for self-reflection and devotion through prayer and fasting, Ramadan is also an occasion when Muslims around the world reaffirm their commitment to helping the less fortunate, including those struggling because of economic hardship and inequality," he added.

In his Ramadan message, Obama stressed U.S. Muslims' efforts to help the less fortunate all through the year and especially on Ramadan.

"At a moment when too many people around the world continue to suffer from senseless conflict and violence, this sacred time reminds us of our common obligations to pursue justice and peace and to uphold the dignity of every human being."

He also repeated his annual invitation to American Muslims to share Iftar at the White House, a tradition going over the past years.

"As I've done every year as President, I look forward to welcoming Muslim Americans from across the United States to the White House for an iftar dinner," Obama noted.

"It will be another opportunity for me to convey America's appreciation for the contributions of Muslim Americans to our country and to wish Muslims around the world a month blessed with the joys of family, community, peace and understanding. Ramadan Kareem."