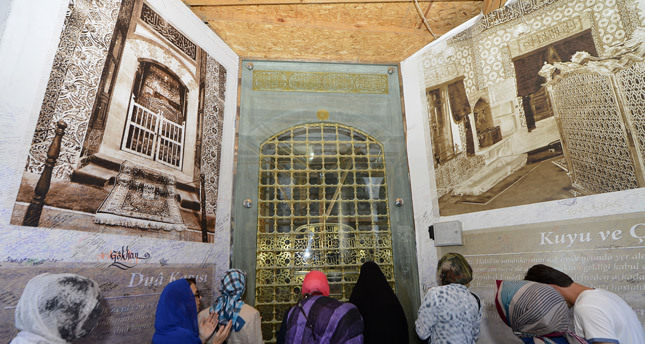 by Daily Sabah Jul 05, 2014 12:00 am
The tomb of Abu Ayyub al-Ansari, a companion of Prophet Muhammad who was buried in Istanbul, was partially reopened on Friday after years of restoration work.

A sacred site among Muslims, the tomb, located in Istanbul's Eyüp district, has been undergoing restoration for over three years. Since the restoration started, the tomb has been open to visitors only in the Muslim holy month of Ramadan, starting from this month's first Friday. The restoration is expected to conclude within six months.

The tomb was opened with the recitation of prayers, and throngs of the faithful crowded the place to say their prayers. As restoration work is underway, visitors are not allowed to stay for long at the site to prevent overcrowding.

Built in 1459 along with an adjacent mosque, the tomb is the resting place of Abu Ayyub al-Ansari, a sahaba or companion of Prophet Muhammad and a prominent Arab Muslim fighter who died circa 672 during a Muslim campaign to conquer Constantinople (present-day Istanbul). His grave was discovered after Ottomans conquered the city in 1453, and a tomb was constructed above it, along with the mosque.