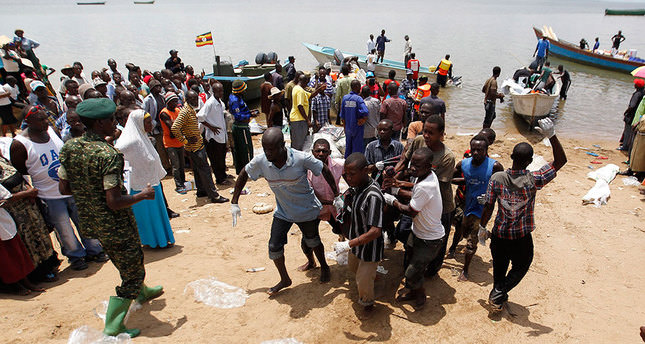 At least 107 Congolese refugees have been confirmed dead after a boat capsized in Uganda's Lake Albert on the border with the Democratic Republic of Congo.

"Today we have retrieved 82 bodies floating in the water," Charles Sebabulindi, police commander in the Albertine Region, told Anadolu Agency on Monday. He said 19 bodies had been recovered since Saturday, when the boat capsized.

"On Sunday, we retrieved six bodies from the water," said Sebabulindi, adding that they had been taken to the Bundibugyo district hospital mortuary in western Uganda. Forty-five people, including four crew members, survived the accident. Sebabulindi said boat passengers, all Congolese refugees, were estimated to have numbered more than 150, including women and children.

"We still cannot ascertain the exact number of dead women and children, but they're a relative number," he noted. The boat had a 12-ton cargo capacity and reportedly used a four-horsepower engine. "I think the number of passengers overwhelmed the boat, plus their luggage," said Sebabulindi. He noted that boats represented the main means of transport between the western Kyenjoyo and Ntoroko districts.

The Uganda Police Marines, the Uganda People's Defense Forces Marine and a fisheries enforcement team all assisted in the rescue.
Sebabulindi said some relatives had been allowed to claim their loved ones' bodies for burial after identifying them. He went on to assert that criminal charges could be brought against the doomed vessel's coxswain. "We got the man; he is in our custody and after a full investigation he shall appear before court," said the senior policeman. "We may charge him with many offences, such as rushing and neglect causing death," he added. "But we need the inspector of vehicles to come and assess the condition of the boat for us to press more charges," Sebabulindi said.

Some media reports quoted survivors as claiming that the coxswain had been drinking on the boat. "We have not ascertained any such information, but it will all be revealed after the investigation," Sebabulindi said.