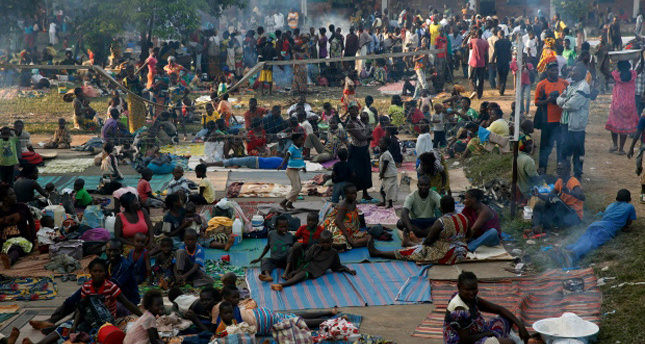 The group, members of an extended family, fled to Boda from the village of Danga 25 kilometers (15 miles) away, seeking shelter from the anti-balaka -- or "anti-machete", mainly-Christian militia groups that have been hunting and killing members of the crisis-torn country's Muslim minority.

But days after the family arrived in Boda, fierce clashes broke out between the anti-balaka and local Muslims, ending with the Christian militia forces encircling the southwestern diamond-mining town.

More than 14,000 Muslims, including the displaced family from Danga, are now trapped inside with no way out and very limited supplies.

"I am suffering very much. No house, no food. The anti-balaka are killing people -- many," said Saifou, one of those sheltering in the suffocating barn.

"I have lost many things, even my cattle. I had 800 of them," said Saifou -- who, like some 200 other displaced people stuck in the town, is from the Fula ethnic group, a predominantly Muslim, herding people whose members are scattered across west and central Africa.

Boda began its bloody downward spiral at the end of January, after coup leader-turned-president Michel Djotodia gave up power under international pressure.

Djotodia was accused of letting ex-fighters from Seleka, the mainly Muslim rebel coalition that swept him to power 10 months earlier, wage a campaign of atrocities against the Christian majority.

Seleka fighters abandoned Boda after Djotodia stepped down, and horrific fighting broke out between people of both faiths. More than 100 people were killed in a week.

The bloodshed -- which typifies the terrifying plunge into ethno-religious violence that has swept the country -- was halted by the arrival of French peacekeeping troops.

Since then, however, anti-balaka forces have laid siege to the town, once called "Boda the Beautiful" for its majestic, centuries-old trees.
A woman in the barn who was nursing a malnourished baby lifted up her shirt and squeezed her breast to show that she had no milk for her infant. Her mother, Khadidja Labi, lay immobile on a mat, already looking like death.

Labi was unsuccessful in signing on for the scarce food handed out each morning by staff of the UN World Food Programme (WFP). The last distribution was four weeks ago, time enough to weaken the family and make them more susceptible to diarrhoea and less resistant to diseases such as scabies and malaria.

The most feeble have died. Yet those who could still stand on trembling legs proved ready to stumble forward and greet visitors.
Karim, clad in a brightly coloured shirt, came back from the food handout disgruntled.

"The WFP isn't giving us sugar, no honey, no firewood, just rice and maize," he said.


"The Christians wanted to kill us in order to take away our property. We can't even go the mosque in our district," added Karim, who was born in Boda and had wanted "to stay here".


He vented the anger felt by Boda's Muslims over businesses that had been looted and destroyed around the town centre, which is crossed by a single long road of red earth, lined by small stalls with virtually nothing to sell. The road is the only territory still open to the Muslims, all gathered into a single district.

Frightened inhabitants can no longer cross three small wooden bridges that traverse the filthy waters of a canal because death is all but certain on the far side. The bridges today lead to a no-man's land of burned-out houses owned by Muslims and Christians alike.

Facing the main road and watching over the no-man's land with machine-guns, about 100 soldiers from France's 2,000-strong peacekeeping force guard the frontier between communities. Three armoured cars are posted on the square in front of the town hall.

To the right of it, a battered old road rises up to the church and Christian districts, which have become home to 9,000 displaced people. Here, a small market remains, along with street kitchens and the sound of music. The mood is less desperate than in Muslim territory and meat, vegetables and fruit are available.

"We want the Muslims to go, since they have shown us their wicked side," said Miguez Wilikondi, a youth leader who has taken charge of the displaced people.

Wilikondi said the Christians had been saved from Muslim militias by anti-balaka forces.

"Thanks to them, we're still alive," he said.

Back in the Muslim enclave, Mahamat, a diamond miner who converted from Christianity to Islam and has 13 children, tried to find room for hope.

"Fortunately we have a well of pure water, otherwise we would be dead," he said.