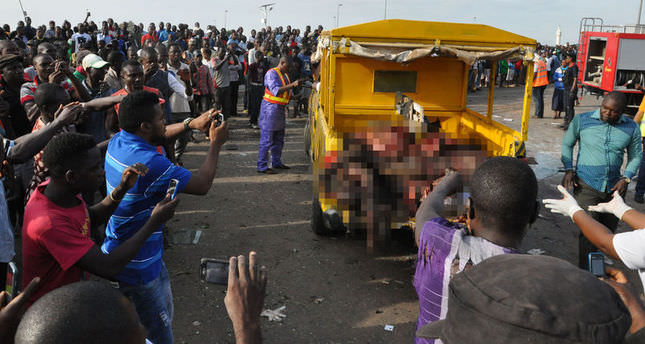 As many as 200 people are feared dead after a bomb exploded yesterday in a motor park in Nigeria's capital Abuja. The blast occurred in a section of a garage occupied by El-Rufai Buses, a major interstate transport company

ABUJA — As many as 200 people are feared dead after a bomb exploded yesterday in a motor park in Nigeria's capital city of Abuja. "I counted at least 15 bodies," Umar al-Hassan, who said he narrowly escaped the blast with small scars on his left hand, told Anadolu Agency.

The bomb exploded in Nyanya, described by many as the biggest motor park in Abuja. The blast occurred in a section of the garage occupied by El-Rufai Buses, a major interstate transport company. "Yes, 15 charred bodies [are] littering the ground and most affected are people going to work in the early hours of the morning," said al-Hassan.

But the Premium Times and PM News local newspapers are both reporting that over 200 people are feared dead. "Some of the dead victims and the injured are being taken to the hospital by ambulances and vans belonging to police," the Premium Times reported. "Our reporter counted more than 50 bodies that are yet to be evacuated," it added. "Several vehicles, including about 12 government-owned, high-capacity buses were destroyed in the attack. Some of the buses were said to be loaded with passengers when the explosion occurred," said the newspaper.