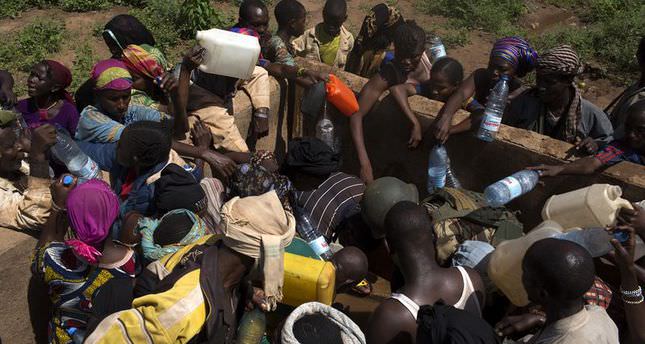 by AA May 01, 2014 12:00 am
BANGUI - European Union forces (EUFOR) arrived in Bangui, the capital of the Central African Republic, on Wednesday to assist French and African peacekeepers in the violence-ravaged country, a military source said.

Made up of 150 soldiers, the European force will gradually increase to reach 800 soldiers in June, the source said.
Created by United Nations Security Council resolution 2134 in January, EUFOR will be responsible for securing M'Poko Airport, which has been taken as a refuge by a large number of displaced people on the background of rampant violence in Bangui.
The mission of EUFOR should last for six months.
On March 24, European Union High Representative for Foreign Affairs and Security Policy Catherine Ashton said the E.U. wanted to contribute to international efforts aiming at bringing stability back to Bangui and the Central African Republic.
The mineral-rich landlocked country descended into anarchy one year ago when Seleka rebels – said to be mostly Muslim – ousted Christian president Francois Bozize, who had come to power in a 2003 coup.
According to the UN refugee agency (UNHCR), around 173,000 people have been internally displaced since last December, while 37,000 others have fled to neighboring countries.
Over 30,000 have fled to the Democratic Republic of Congo, while Chad has received 5600 and Cameroon roughly 1000, according to UNHCR figures.
Last Update: May 01, 2014 1:33 pm
RELATED TOPICS