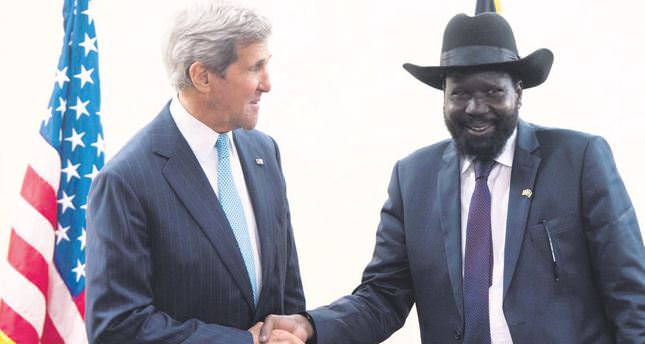 South Sudan's president agreed Friday to meet with his rival as soon as next week to jumpstart peace talks that have been stalled for months, U.S. Secretary of State John Kerry said, potentially laying the groundwork for a new government to bring the world's newest nation out of bloodshed

JUBA,South Sudan — U.S. Secretary of State John Kerry met for about 90 minutes with President Salva Kiir in his lush office compound in the capital Juba and later emerged to announce a tentative agreement for the peace talks in Ethiopia. The prime minister of Ethiopia, Hailemariam Desalegn, has agreed to mediate the talks.

"The unspeakable human costs that we are seeing over the course of the last months, and which could even grow if they fail to sit down, are unacceptable to the global community,"Kerry told reporters after his meeting. "Before the promise of South Sudan's future is soaked in more blood, President Kiir and the opposition must work immediately for cessation of hostilities and to move toward an understanding about future governance for the country."

Kiir, who wore his trademark black cowboy hat when he welcomed Kerry to Juba, did not attend the press briefing.

Kerry said a cease-fire would likely lead to a transitional government in South Sudan but declined to comment on whether Kiir or Macher could have a role in the country's future leadership. If the peace talks happen, they would mark a turning point in nearly six months of horrific fighting that has largely broken down along ethnic lines between rival Dinka and Nuer tribes. The violence has been compared to the threat of genocide, and could also lead to famine later this year since farmers among the nearly 1 million South Sudanese who have fled their homes have had to abandon their crops.

Thousands have been killed in the fighting, which began when Kiir, a Dinka, accused Machar, a Nuer, of plotting a coup to seize power last December.

If Kiir and Macher fail to move strongly to curb the violence, or if other fighters continue to violate human rights and disrupt humanitarian aid, Kerry said they would be held accountable. The consequences would range from economic sanctions to, potentially, prosecution by international courts.

The U.S. and U.N. have threatened to bring sanctions against militants on both sides of the fighting including, potentially, Kiir and Machar themselves. And Western officials are trying to persuade the African Union to deploy thousands of troops to South Sudan to keep the peace.

Hope for a cease-fire lies largely in the hands of AU officials, who are undecided on what a peacekeeping force would look like, as well as leaders of neighboring Kenya, Ethiopia and Uganda who are weighing their own sanctions against South Sudan. Those penalties likely freezing the assets and travel privileges of South Sudan's elite would carry far more weight than sanctions by the U.S. alone, which has relatively limited interaction with the eastern African nation.

U.S. lawmakers want to impose the sanctions anyway. In a letter Thursday to President Barack Obama, nine U.S. senators, including Senate Foreign Relations Chairman Bob Menendez, D-N.J., called for targeted sanctions on militants who are believed to have directed the killings or otherwise participated in them or committed other kinds of human rights abuses. The letter also called for additional penalties by the U.N. Security Council and holding Kiir and Machar personally accountable for shepherding through a peace agreement.

"As these unconscionable acts of violence continue, South Sudan's leaders continue to prioritize military gains ahead of the well-being of their people," the senators wrote. "The South Sudanese government has an obligation to ensure that the lives of their people and future of their young country are not marred by further violence."