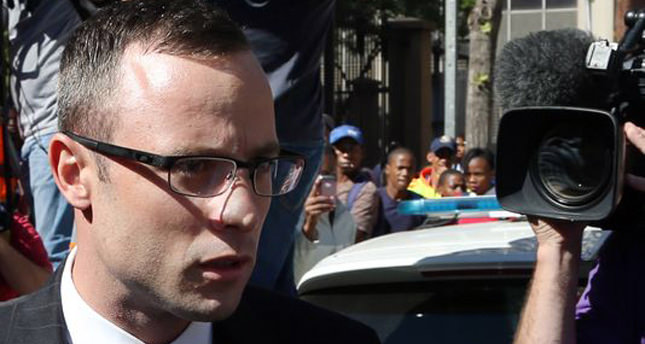 by Associated Press May 05, 2014 12:00 am
PRETORIA, South Africa — A neighbor and friend of Oscar Pistorius testified Monday that the double-amputee athlete Pistorius (South African sprint runner) was "torn apart" and desperately trying to save Reeva Steenkamp minutes after fatally shooting her at his home last year.

Johan Stander and his daughter were at Pistorius' house soon after the shooting in the early hours of Feb. 14, 2013, and Stander testified that he believed that the Olympian had made a mistake when he shot and killed Steenkamp because of the runner's emotional state when they found him.

"I saw the truth there that morning. I saw it and I felt it," Stander testified, saying Pistorius was "really crying. He was in pain."
Stander was the fourth witness called by the defense and took the stand as the globally televised trial resumed after a two-week recess and moved into its seventh week.

Pistorius' defense was attempting to present a scenario of Pistorius' desperate panic at shooting his girlfriend in error through a toilet door after thinking she was a dangerous intruder, as he claims. Prosecutors maintain Pistorius is lying and his story is designed to cover up that he shot the model and reality TV star intentionally in the midst of a heated nighttime argument.

The 27-year-old Pistorius, a multiple Paralympic champion and the first amputee to run at the Olympics faces 25 years to life in prison if convicted on the premeditated murder charge.