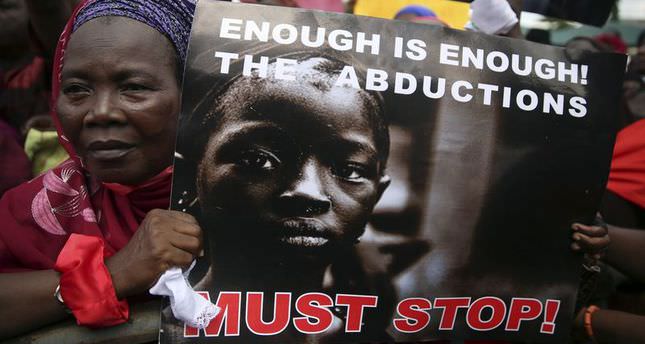 by May 06, 2014 12:00 am
MAIDUGURI, Nigeria — The leader of Boko Haram on Monday threatened to sell more than 200 schoolgirls his Islamist militant group kidnapped in northeastern Nigeria last month.

Boko Haram militants stormed an all-girl secondary school in the village of Chibok, in Borno state, on April 14 and packed the teenagers, who had been taking exams, onto trucks and disappeared into a remote area along the border with Cameroon.

The attack shocked Nigerians, who have been growing accustomed to hearing about atrocities in an increasingly bloody five-year-old insurgency in the north.

"I abducted your girls. I will sell them in the market" Boko Haram leader Abubakar Shekau says in a video, chuckling as he stands in front of an armored personnel carrier with two masked militants wielding AK-47s on either side of him.

Boko Haram leader claims "women are slave" and this is sanctioned by Islam. There is no greater enemy of Islam than ignorance and stupidity.


Boko Haram, seen as the main security threat to Nigeria, Africa's leading energy producer, is growing bolder and extending its reach. The kidnapping occurred on the day a bomb blast, also blamed on Boko Haram, killed 75 people on the edge of Abuja, the first attack on the capital in two years.

The girls' abduction has been hugely embarrassing for the government and threatens to overshadow its first hosting of the World Economic Forum (WEF) for Africa on May 7-9.

Nigerian officials had hoped the event would highlight their country's potential as an investment destination since it became Africa's biggest economy after a GDP recalculation in March.