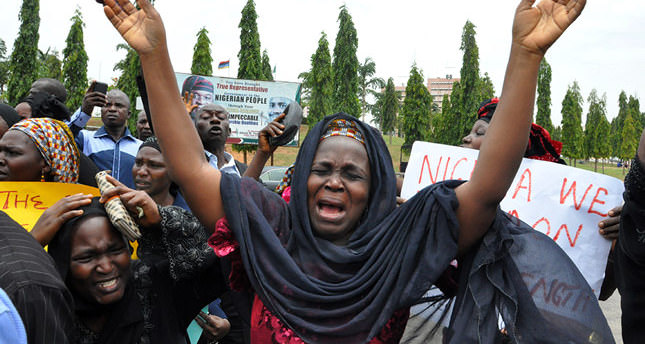 by Anadolu Agency May 09, 2014 12:00 am
NIGERIA — World powers, including the U.S. and China, have joined in the search for the more than 200 schoolgirls abducted by the terrorist organization Boko Haram who have also killed hundreds of people in the country's northeast this week. Amid global outrage over the kidnapping of the teenagers, the U.S., U.K. and France are sending specialist teams to Nigeria. China promised to supply "any useful information acquired by its satellites and intelligence services" to Nigeria.

The latest insurgent attack targeted the town of Gamboru Ngala on the border with Cameroon, where gunmen this week razed scores of buildings and fired on civilians as they tried to flee.

Zanna said the town had been left unguarded because soldiers based there had been redeployed north towards Lake Chad in an effort to rescue the kidnapped girls.

Nigeria's response to the kidnappings has been widely criticized, including by activists and parents of the hostages who say the military's search operation has been inept so far.

President Goodluck Jonathan's administration has sought to appear more engaged with the plight of the hostages in recent days, especially after Boko Haram chief Abubakar Shekau released a video threatening to sell the girls as "slaves."

In a second kidnapping, 11 more girls aged 12 to 15 were seized Sunday from Gwoza, an area not far from Chibok and also in Boko Haram's Borno base.

U.S. President Barack Obama has described the Chibok abductions as "heartbreaking" and "outrageous," and announced that a team of military experts had been sent to help Nigeria's rescue mission.

Michelle Obama expressed sympathy for the schoolgirls, in a personal message on Twitter.

The tweet was signed "mo," meaning she wrote it herself, and it was retweeted more than 8,500 times in just a few hours. Pakistani schoolgirl Malala Yousafzai, who survived being shot in the head by the Taliban, also offered her support saying she sees the kidnapped girls as her sisters. "When I heard about the girls in Nigeria being abducted I felt very sad and I thought that my sisters are in prison and I thought that I should speak up for them," she said on CNN.

Meanwhile, Speaking to Anagolu Agency, Nigeria's ambassador to Ankara said that the Nigerian militiant group Boko Haram are "abusing the name of religion", "Boko Haram has nothing to do with religion. How can they claim to be Muslims while they are kidnapping innocent people?" said ambassador Ahmed Abdulhamid Madori. "They are killings Muslims, Christians and destroying mosques and churches. They are trying to hang on to religion."

Madori said it was a serious threat not only to Nigeria but to the entire world. Boko Haram had refused to free the kidnapped school girls and threatened to sell them into marriage and slavery. "We are doing everything possible within our means to make sure that we recover these ladies without casualties," he added.