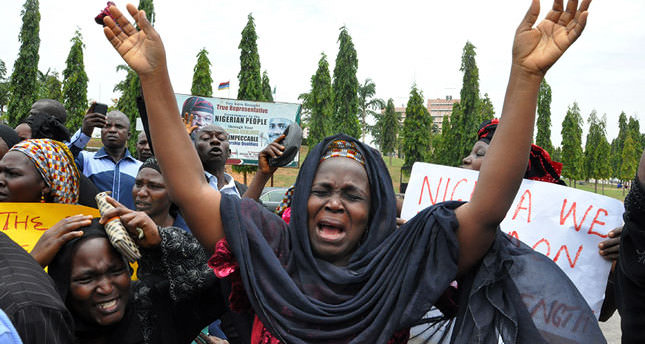 As the international community protests the kidnapping of more than 200 Nigerian schoolgirls, the threat of more violent attacks has led leaders across the world to offer assistance to the Nigerian government as they try to rescue the lost girls

CHIBOK, Nigeria — The mass abduction of more than 270 girls from a boarding school in Chibok in Nigeria's northeastern Borno state, on April 14 by Nigeria's militant group Boko Haram, an al-Qaeda-affiliated group, has caused widespread indignation and sparked worldwide protests.

Boko Haram's leader Abubakar Shekau, warned in a video recording that he would sell the girls at a price of $12 (TL 25) and this week 10 more girls were taken by the group. Since the release of the video a social media campaign with the hashtag #BringBackOurGirls was launched to arouse more interests over the horrific kidnapping. U.S. first lady Michelle Obama has also joined the campaign and tweeted "Our prayers are with the missing Nigerian girls and their families. It's time to #BringBackOur-Girls." The U.S., U.K., France and China have offered to help Nigeria rescue the hostages through varying levels of military and technical assistance.

All four have also defined Boko Haram as a global threat. The U.S. State Department spokesperson, Jen Psaki stated in daily press briefing in May 8 that the U.S. government has sent some technical experts and law enforcement teams skilled in intelligence to assist the Nigerian army.

While worldwide protest over the kidnapping grow, Boko Haram has continued to carry out violent attacks in northern Nigeria. Boko Haram bombed a bridge linking Nigeria to Cameroon overnight killing at least 30 people. It is expected that the group's violent actions will continue but experts warn that foreign intervention in the country alone cannot reduce the threat faced by people there. "The deployment of U.S. forces in Nigeria would not change anything in the region due to the fact that the social dynamics in Nigeria will not allow any military pull down the radical group Boko Haram," said one African expert in the Turkish Prime Ministry who spoke to Daily Sabah in a phone interview.

Nigeria, the most populous and the richest country in the region and one of the largest oil producers in the world, suffers from some of the worst levels of economic inequality in the world. There is a stark contrast between the Christian south of the country and Muslim north, which suffers from poverty, low employment rates and a lack of education opportunities and access to health care. The central government's power is extremely weak and largely unable to govern the north where powerful tribes maintain strict control. Taking the social structure into consideration, one education system dominates, Islamic education combined with the traditional social elements. All these factors contribute a system which has seen numerous youth join radical groups or become more sympathetic to Boko Haram.
This growing radicalization in northern states is seen as a crucial threat to both the future of Nigeria and global security. As Boko Haram damages the Muslim community, which now lives in fear of more attacks, outside the predominantly Muslim regions of the country there is a growing concern that the pattern of radicalization could spread to other areas in the region if the prevailing social patterns cannot be altered by the central government. "As long as the political problems remain unresolved, Boko Haram will become more radicalized than ever as they become more religiously oriented illegal terrorist group," says Mehmet Özkan, a Foreign Policy analyst at the Foundation for Political, Economic and Social Research.