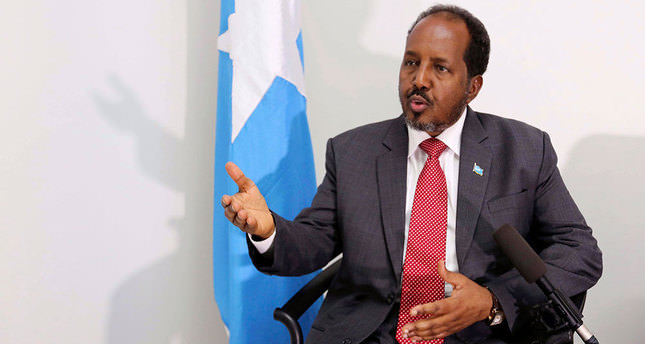 by reuters
May 11, 2014 12:00 am
MOGADISHU, Somalia — Somalia needs help airlifting basic supplies to towns recently retaken by African Union-led forces because insurgents who were driven out from those areas are blocking aid convoys, the president told Reuters in an interview.

President Hassan Sheikh Mohamud accused the Al Shabaab militants of trying to create food shortages in newly "liberated areas" to turn locals against the state - and said the aid would show people the benefit of returning to government control.

"This is the Al Shabaab propaganda ... and why they are stopping the movement of goods," he said in Mogadishu after talks with major donors on Friday on speeding up the pace of the rebuilding effort. "(An) airlift is very, very important."

African troops working with Somalia's army have completed the first phase of a campaign to retake territory still in Al Shabaab's hands after it was routed from Mogadishu in 2011.

But officials said the towns cleared of Al Shabaab militants are in a dire state. Any food stocks have been emptied, driving people away. Some centres look more like ghost towns, said one Western diplomat, which "is not a very positive picture".

It highlights the challenge Somalia faces in countering an insurgency that increasingly involves guerrilla tactics, while trying to build loyalty to central government in a state fractured by clan rivalries and two decades of war.

The president said another obstacle to reaching retaken areas was the onset of rains, making poor quality roads impassable even in places Al Shabaab were not operating.

He said donors had promised to respond, adding that helicopters were not needed to make a "huge food delivery" but were required for basic nutrition for children and the weak.

The World Food Programme was considering contracting a helicopter dedicated to humanitarian needs, as U.N. helicopters in Somalia now have multiple tasks, including logistical support for troops, such as evacuating injured, the diplomat said.

Although the first stage of the new campaign launched this year had not met all targets, Mohamud said 3 million people and nine towns had been brought under government control. He said Al Shabaab still controlled "a large proportion of rural areas".

Extending control beyond urban centres and into the countryside where rebels easily melt away has been a persistent challenge for African Union peacekeepers, who are still the main bulwark against rebels although Somali troops fight with them.

"The second phase of the operation of course will focus on sifting out Al Shabaab even from the rural areas," Mohamud said.
The slow pace of change in the nation and ongoing hardship for many has fuelled criticism of the president, prompting a group of more than 100 lawmakers to submit a petition this week demanding he quit. Security failings were a big complaint.

The president rebuffed parliamentary critics, saying new joint operations between Somali security agencies and African forces was breaking down rebel networks in Mogadishu, where a spike in attacks particularly around February included an assault on the presidential palace in the heart of the city.

"Security should not be politicised," he said, adding it was tough to stop all suicide attacks in a city of 2 million people.

Mohamud has also been buffeted by criticism of his government's financial management, after two central bank governors quit last year with questions raised about graft in government and the award of some contracts.

The government has dismissed reports of corruption. But the president said a new Financial Governance Committee comprising three Somali members and three picked by donors, was restoring confidence. Diplomats said reviewing contracts and offering recommendations on such issues were part of its mission.

"International partners showed that they are now more confident in the system than before, and further reforms will be coming in the financial sector," Mohamud said after Friday's talks, adding he hoped for more direct budget support.

Qatar and Turkey already provide direct aid to state coffers, but Western donors are more wary. Norway supports budget spending via a facility set up with World Bank help that, one donor source said, could be expanded in coming months.

Despite a wobble in international support for Mohamud over financial management concerns in past months, donors at Friday's showed support for the president in his battle with lawmakers, saying Somalia needed continuity at the top.

"The idea of delaying everything or stopping everything and changing institutions and people at this stage is not something that any of the international partners were thinking is a very good idea," said one senior Western diplomat at the talks.

Attendees at Friday's talks promised to speed up delivery of projects in several key areas, such as security, humanitarian work and financial management issues, by June in part to help ease public dissatisfaction about the pace of progress.