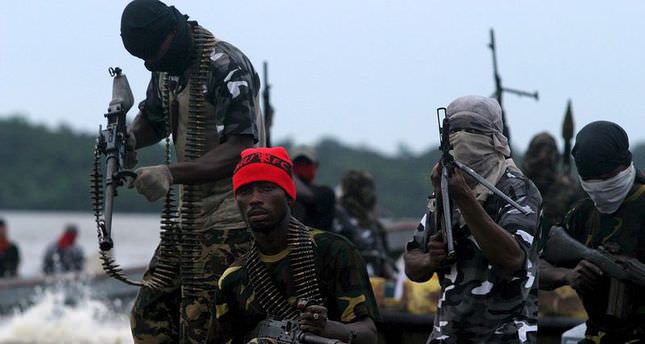 by AA May 12, 2014 12:00 am
LAGOS — Nigeria's Movement for the Emancipation of Niger Delta (MEND) militant group has joined a local chorus of condemnation of the abduction of scores of schoolgirls by Boko Haram insurgent group, blaming it on "incompetence and corruption" of President Goodluck Jonathan's government.

"We have constantly warned Nigerians about Goodluck Jonathan and his train of sycophants running the country," Jomo Gbomo, MEND's spokesman, said in a statement Sunday evening.

Gbomo said the Amnesty International's claim that the government and the troops received - but did not act on - a prior intelligence report about the impending attack in Chibok, where the girls were abducted, exposes the "incompetence, corruption and systematic failure" in the military and Jonathan's government.

MEND, one of the largest militant groups in the Niger Delta, the president's region, claimed responsibility for the country's first ever terrorist attack in capital Abuja on October 1, 2010 when an independence anniversary attended by Jonathan was going on.

On April 14, militants from Boko Haram group stormed a school in the town of Chibokin the country's northeast Borno State and loaded scores of schoolgirls onto trucks before driving away unchallenged.

The exact number of abducted schoolgirls, however, still remains dogged by controversy.