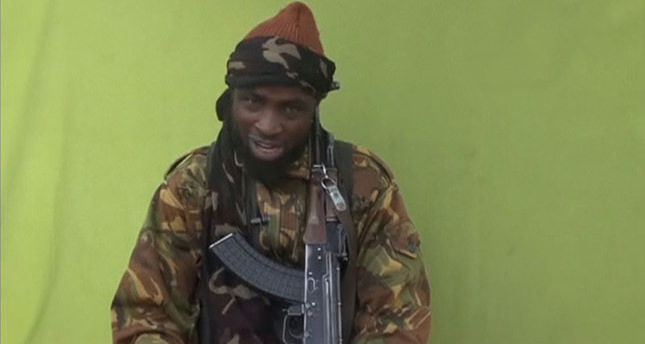 by AA May 13, 2014 12:00 am
LAGOS — A Nigerian police spokesman insisted Monday that Boko Haram chief Abubakar Shekau was dead despite a recent video footage in which he bragged the abduction of scores of schoolgirls.

"Boko Harm has become a franchise, anybody can assume and lay claim to any name," secret police spokesperson Marilyn Ogar told a news briefing.

"If security sources tell you that somebody is dead, you don't have to come out and doubt that," she said.

Shekau appeared in a video footage on Monday to call for swapping scores of abducted schoolgirls for Boko Haram militants held by Nigerian authorities.

In a 17-minute video obtained by the local Daily Trust newspaper, Shekau, clad in his traditional military fatigues, Shekau bragged that some of the girls – many of whom are said to be Christian – had converted to Islam.

"If you want us to release your girls… you must release our brethren that are held in Borno, in Yobe, in Kano, in Kaduna, in Abuja, in Lagos, up to Enugu," Shekau said, speaking a mixture of Arabic, English and the local Hausa and Kanuri dialects.

Boko Haram, which means "Western education is forbidden" in the Hausa language, first emerged in the early 2000s preaching against government misrule and corruption.