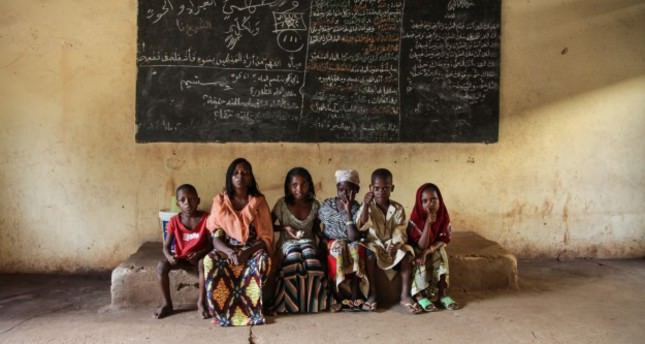 by AA May 15, 2014 12:00 am
BANGUI — A Muslim girl was killed while her sister and mother were slightly injured on Wednesday by a bomb thrown at them by the predominantly Christian anti-balaka militia in southwestern Central African Republic (CAR), a military source and eyewitnesses have said.

The slain girl was only six years old and her injured sister nine, eyewitnesses said, adding that anti-balaka militiamen had thrown the bomb in Boda city as the girls and their mother prepared to wash clothes in the Amia River.

A military source from a French peacekeeping force stationed in the country, meanwhile, said the girl had been killed by shrapnel from a hand grenade thrown by anti-balaka militiamen during confrontations with French peacekeepers.

The source, who asked not to be named, added that the clashes had erupted against the backdrop of a dispute over calls to move a planned meeting between militiamen and government representatives outside the city.

A government committee headed by the vice-president of CAR's National Transitional Council, Léa Koyassoun-Dounta, made its presence felt in different areas of Boda on Tuesday.

The committee is part of a newly-formed crisis-resolution group in the city tasked with persuading Muslim residents – currently under the protection of French and African peacekeepers – to leave Boda, lest they should be targeted by the anti-balaka militia.

Another meeting with the city's Christian residents had been scheduled to take place, but the French peacekeepers, citing security reasons, had suggested the meeting be moved to another venue.

This, however, angered the anti-balaka, igniting the clashes in which the six-year-old girl was killed.

CAR, a landlocked, mineral-rich country, descended into anarchy one year ago when seleka rebels – said to be mostly Muslim – ousted Christian president Francois Bozize, who had come to power in a 2003 coup.

According to the U.N. refugee agency (UNHCR), around 173,000 people have been internally displaced by the violence since last December, while 37,000 others have fled to neighboring countries.

Over 30,000 have sought refuge in the nearby Democratic Republic of Congo, while Chad has received 5600 and Cameroon roughly 1000 refugees, according to UNHCR figures.