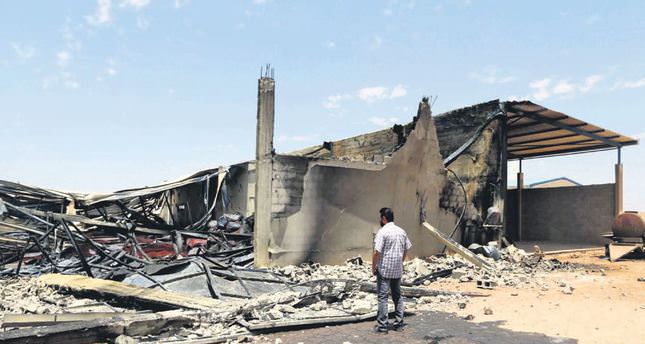 In light of recent attacks by militia groups that have partly filled the vacuum in Libya's chaotic political landscape, security concerns have led the Turkish government to close its consulate in Benghazi

ISTANBUL — A heavily armed group allied to renegade General Khalifa Belqasim Haftar stormed the Libyan parliament in Tripoli on Sunday, demanding the suspension of parliamentary activities. This, in conjunction with persistent political turmoil and numerous coup attempts has prompted Turkish officials to close their consulate in Benghazi.

The interim government has condemned the attacks challenging the legitimacy of the Libyan central government. Libyan Justice Minister Salah al-Marghani in a statement on Monday morning underscored their opposition to "the expression of political opinion through the use of armed force" and called for an end to violence through national dialogue. The justice minister also stated that the national government has remained in control of the country despite demands by militia groups to hand over power.

The Associated Press news agency reported that before hitting the parliament building with antiaircraft guns and rockets, members of an armed group allowed politicians to flee and save their lives but that two people were killed and more than 50 were wounded.

Shortly after broadcasting a statement read out by General Mokhtar Farnana, speaking on behalf of Haftar's group, announcing the suspension of the parliament with a 60-member constituent assembly to take over, private television channel Libya International was hit by a rocket attack. "We, members of the army and revolutionaries [former rebels], announce the suspension of the General National Congress," said Farnana in his statement, adding that armed forces loyal to Haftar were responsible for Sunday's attack on the parliament. Farnana also stated the latest attacks were not to be seen as a coup attempt, but the will of Libyan people.

In addition to a sustained heavy weapons attack against the Libyan parliament, violence escalated early on Monday as armed men fired rockets at Benina airport in Libya's second-largest city of Benghazi. Libyan authorities closed the airport there on Friday for security reasons. Since last Friday, Benghazi's airport has been closed as Egyptair announced on Saturday that it has stopped all flights to Benghazi due to security issues.

Libya's successive governments have been struggling to impose their authority over brigades of former rebels and militias who have been refusing to disarm since Muammar Gaddafi's one-man rule was removed from power in 2011.

The government, parliament and nascent armed forces have been trying to bring stability to the country in order to prevent any potential threat of a coup d'état. However, the latest violence has increased a sense of chaos within the country while rebel militias have insisted that the fragile national government has lost its legitimacy.

After the toppling of Gaddafi's 42-year rule, Libya has long been suffering from the chronic absence of security and order with numerous attacks, kidnappings and crimes. The central government does not appear as though it wields enough power to save the country from long-lasting political instability and violence due to the absence of an effective army. A multitude of armed groups in the form of official and non-official military units provides security across much of the country. This can prove that they have easily taken the law into their own hands while paving the way to increasing the anti-government rebellion that is spreading across the country. Taking recent reports into account, it can be concluded that since last Sunday's attacks, there has been no clear evidence whether the interim government still has full control over the parliament.

Dr. Muhammed Adil, an expert on International Relations, spoke to Daily Sabah about the turbulent political situation in Libya and said that as long as the incumbent government lacks the image of a powerful political authority, the existing rebel militia group would carry out the task of controlling government branches and carrying out violent attacks. "The coup attempts would not be a solution, on the contrary it would lead to more chaos in the country," said Mr. Adil adding that it would be important to holding democratic elections, strengthen government authority and promote the work of NGOs for a brighter future for the Libyan people.

Monday's developments have raised concern in the international community and drawn its attention to the deteriorating situation after Sunday's violent attacks on the parliament in Tripoli.

According to reports by AFP, EU spokesman Michael Mann, on Monday, pointed out the need for a democratic political system, adding that "The EU renews its commitment to support the Libyan people...and calls on all parties to build consensus so as to ensure a transition to a stable democracy."

The SPA state news agency reported on Monday that due to the deteriorating security situation, Saudi Arabia has closed its Libya embassy and evacuated its diplomats.

Taking into account a series of violent weekend attacks of rebel groups, the latest violence in Tripoli came after another deadly fighting between Islamist forces and Haftar's forces so-called National Army on Friday in Benghazi, backed by warplanes, reportedly taking the weekend's death toll to at least 79.
Last Update: May 20, 2014 2:02 am
RELATED TOPICS