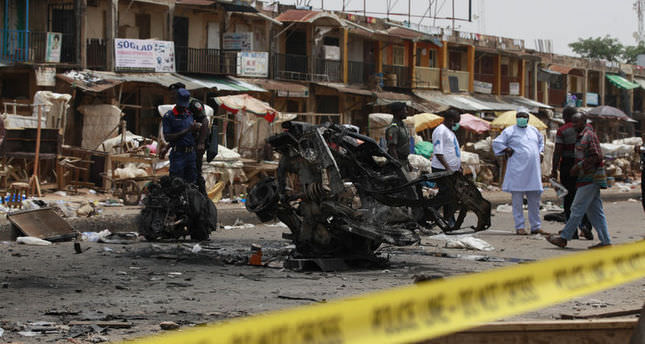 by May 23, 2014 12:00 am
MAIDUGURI, Nigeria — Suspected militants from Boko Haram group shot dead 29 farm workers as they tilled their fields in remote northeast Nigeria, a police source said on Thursday, amid a mounting insurgency increasingly targeting civilians.

The attackers destroyed most of the village of Chukku Nguddoa and wounded another 10 people on Wednesday, said the police source in Borno state, the heart the revolt that is piling political pressure on the government.

Boko Haram, which grabbed world headlines last month by kidnapping more than 200 schoolgirls further north in Borno, has stepped up its five-year-old campaign to carve an Islamic state out of the religiously mixed oil producer.

Bomb attacks are growing more sophisticated, including two on the capital Abuja last month, and massacres of villagers in the area where Boko Haram is based are an almost daily occurrence.

But when President Goodluck Jonathan ordered a military offensive a year ago to flush them out, civilians formed vigilante groups to help out - and themselves became targets.

The mounting killings of civilians, and the government's apparent inability to halt them, have triggered widespread anger.

Nigerian teachers went on strike and staged rallies nationwide on Thursday in protest against the girls' kidnappings, as well as the killing of 173 teachers by the insurgents over the years.

A group of protesters in the capital Abuja tried to march up to the Presidential Villa but were prevented by a row of police.