Voting extended to a third day in Egypt 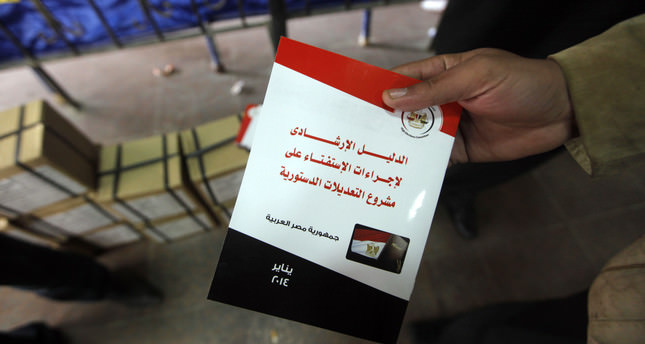 by Associated Press May 27, 2014 12:00 am
CAIRO — Egypt extended its presidential election an extra day as the government, military and supporters of front-runner Abdel-Fattah el-Sissi scrambled on Tuesday to increase turnout after two days of reportedly thin voting dented the former army chief's attempts to garner an overwhelming show of public support.

Scenes of empty polling stations drove el-Sissi supporters in the country's TV stations into a froth Tuesday, scolding Egyptians for not turning out after months of media adulation of the retired field marshal. The government and media have been depicting him as the country's savior after his ouster last year of the first freely elected president, Islamist Mohammed Morsi.

Low turnout would be a heavy symbolic blow to el-Sissi, It would suggest a significant sector of Egyptians beyond his Islamist opponents remain skeptical of the 59-year-old el-Sissi. Islamists are boycotting the vote, furious over Morsi's ouster and a fierce crackdown against them that has killed hundreds. Many secular critics worry that yet another military man as president will mean a return of the autocratic policies of President Hosni Mubarak, toppled in a 2011 popular uprising.

El-Sissi is poised for an almost certain victory. But he and his backers seek a large turnout to send a message to the West as well as to his domestic opponents that Morsi's ouster was not a coup but another popular revolution.

There were no official figures on turnout in the previous day's voting. On Tuesday, voting appeared even slower than the day before, though a scorching heat wave may have been a factor, with an increase was expected after nightfall.

Hani Abdel-Latif, spokesman of the Interior Ministry, in charge of police, told the Associated Press that security reports estimated that at least 30 percent of the nearly 54 million registered voters cast ballots Monday and the first five hours of voting Tuesday.

But the campaign of El-Sissi's opponent in the election, leftist politician Hamdeen Sabahi, said its representatives at polling stations estimated turnout Monday at only 10-15 percent.

The election commission presented its decision to extend voting for a third day as in response to demands from voters. "We found that there is a general desire to allow a bigger chance for voting," Abdel-Wahab Abdel-Razeq, a election commission official, told Al-Hayat TV.

He said there were complaints over the heat and from migrant workers, who under the rules have a hard time voting in their place of residents.

But Sabahi's campaign said the low turnout was a "clear message by the people and youth ... rejecting the attempt to bring back old regime policies."

The worry among officials and el-Sissi's supporters was clear since polls closed Monday.

In an unusual move, the chief of staff of the military, Mahmoud Hegazy an in-law of el-Sissi visited polling stations in the south on Tuesday and urged voters to come out, saying the stakes are high. "We must go down and express our opinion. Go down and choose as you please," he told reporters.

"By sitting at home, they are wasting what we have accomplished the past year ... our war on terrorism," Hayat el-Dardiri on the pro-military Faraeen TV said. "Where are the people?"

Mostafa Bakri, a former lawmaker and campaigner for el-Sissi, warned that unless big numbers of voters come out, Brotherhood supporters are ready to take advantage and go to the streets to protest

"It will not work to have a presidential candidate win with fewer votes than what the ousted Morsi got ... We must surpass this benchmark," said Bakri on Sada el-Balad TV.

The government tried to beef up turnout. After the first day of voting, it abruptly declared Tuesday a public holiday to give millions of government employees time to go cast ballots and extended voting hours by an hour to 10 p.m. There are roughly 5.5 million government workers in this country of about 90 million people.

Election commission officials warned they will implement a rarely applied rule fining all able-bodied voters who do not cast ballots. The fines, set at $72, are a hefty sum for most Egyptians.

Egypt's deep divisions were on full display during voting. At some Cairo polling stations, lines of el-Sissi supporters waved Egyptian flags and wore clothes in the national red-white-and-black colors. Men and women, including ones wearing the conservative Muslim veil, danced to pro-military pop songs.

In strongholds of the Brotherhood which has dominated all other elections since Mubarak's ouster the polls were virtually deserted, reflecting the group's calls for its supporters to boycott.

The ouster of Morsi came after massive protests demanding his ouster, reflecting how much of the public had turned against him and his Muslim Brotherhood during his year in office. Security forces have since killed hundreds of Islamists and arrested thousands, vowing to eliminate the group. The Brotherhood has persisted with protests, rejecting the political process established after what it calls a coup against democracy.

"Those shocked at the people's abstention (from voting) ... must remember that this people tasted freedom and will not go back and will accept no less and are determined to restore it soon," Mohammed Mahsoub, a member of the Islamist al-Wasat party and of a Brotherhood-led coalition, wrote on his Twitter account Tuesday.

But even among those who supported Morsi's ouster, there have been voices of discontent toward el-Sissi. Some dislike the bloodshed since the ouster. Others are reluctant to see the military dragged into politics. Many of his secular critics see the former army chief as a new Mubarak, especially after his campaign comments insisting that dissent and protest must end to allow stability for the economy to be repaired.

For much of the day Tuesday, many polling centers around the capital, Cairo, appeared deserted.

More than a dozen other women waited at a polling station in the heavily populated district of Imbaba.

"We want Egypt, and el-Sissi is Egypt, Egypt, and again Egypt," one of them, 40-year-old Seham Sayed, said.

At a nearby kiosk that sells drinks and chips, vendor Ahmed Rashad Ismail said he is not voting.