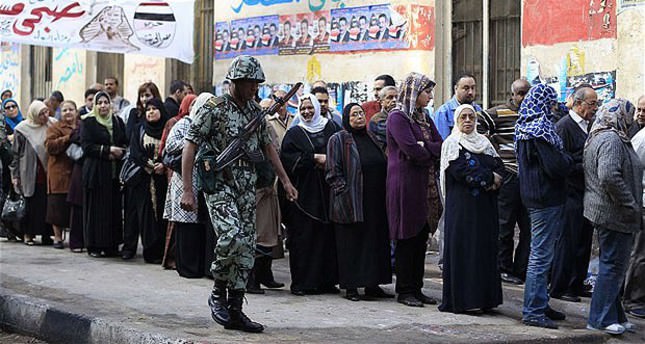 by Raide Oral May 28, 2014 12:00 am
CAIRO — The Egyptian presidential election polls were closed yesterday amidst demonstrations by the followers of the former president Mohammed Morsi who question the legitimacy of the this year's ballot.

Egyptians went to the polls nearly a year after the nation's first freely elected president Morsi was ousted in a military coup led by former army chief Abdel Fattah El-Sisi on June 3, 2013. El-Sisi's only rival for the presidential elections this week was leftist Hamdeen Sabahi, the founder of the Egyptian Popular Current. Morsi's Muslim Brotherhood, which was banned by the Egyptian court, boycotted the presidential elections.

The Egyptian National Alliance announced that a large part of the population protested the elections to support legitimacy and reject the coup regime. Meanwhile, Egyptian authorities declared yesterday a government holiday and ordered that voting hours to be extended in the second day of the elections.

Prime Minister Ibrahim Mehleb said that the second day of voting would be a holiday for public-sector workers "in compliance with the desire of the people" to be able to vote. The moves came amid mixed reports about turnout in the polls.

Mustafa Sıtkı Bilgin, a Middle East expert, spoke to Daily Sabah about the election: "There is no doubt that the Presidential elections that
are taking place in Egypt over the last two days is not a democratic one but it is rather a coup regime's elections. Because the elections do not reflect the popular will but rather is aimed to make the military regime set up by General Abdulfettah el Sisi legitimate.

It is for this reason that the Egyptian People protested the elections in many cities such as Cairo, Beni Süveyf, Feyyum, Mansura, Minya, Şarkıyye and Bahira." "News reached to the world media that many electoral frauds have been conducted during the elections. Also the security of the elections have not been properly achieved.

Under these circumstances these elections will not provide a good result for the future of Egypt. Two crucial problems are needed to be dealt with immediately: the severe economic conditions and the worsening security situation. The perception of the Egyptian Presidential elections is that a remedy to these problems is quite far away."

According to a written statement by the National Alliance, Egyptians showed their persistence in restoring the 25 January Revolution once more. A significant part of the country organized protests, denouncing the illegitimate elections.

The presidential elections were held under strict security cautions. A total of 400,000 police officers were allocated to control the streets and the ballot boxes. El-Sisi has been recognized as de facto president of Egypt since then.
RELATED TOPICS