Egypt vote drags on, people to vote until el-Sisi elected 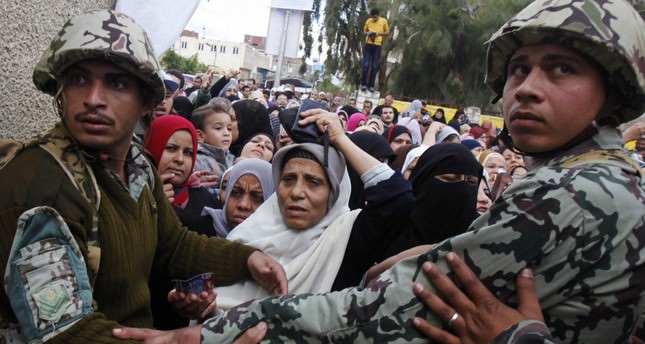 by May 29, 2014 12:00 am
CAIRO — Egyptians were initially slow to vote on a hastily added third day of a presidential election yesterday after a lower-than-expected turnout threatened to damage the credibility of the man widely forecast to win, former army chief Abdel Fattah el-Sisi. An early tour of Cairo polling stations suggested authorities would again struggle to get more people to cast their ballots. The same pattern emerged in Egypt's second city, Alexandria, Reuters reporters said. In a country polarized since a popular uprising toppled Hosni Mubarak in 2011, opposition to another military man becoming president, discontent at suppression of freedoms among liberal youth.

After months of adulation by the media encouraged by his supporters in government, the security services and business, many Egyptians were shocked when the election failed to produce the mass support predicted by Sisi himself.

Poor backing in the election in his deeply divided country would mean Sisi's legitimacy as head of state of the Arab world's most populous nation would be harmed at home and abroad.

The two-day vote was originally due to conclude on Tuesday but was extended until 9 p.m. (1800 GMT) Wednesday to allow the "greatest number possible" to vote, state media reported. "The state searches for a vote," said a front-page headline in privately owned Al-Masry Al-Youm newspaper.

Distancing Sisi from the vote extension, seen by commentators as an embarrassing attempt to attract every last vote from a reluctant electorate, his campaign announced that he had objected to the decision. The decision to extend the voting by a day may prove to be a strategic blunder unless many more Egyptians turn up to vote.

A polling station with 6,200 registered voters in Cairo's working class Shubra district was empty shortly after polls opened on Wednesday, except for polling staff, soldiers and police.

Despite an official campaign to bring out more voters, polling places were thinly attended for a number of reasons. The Muslim Brotherhood, believed to have one million members in a country of 85 million, has rejected the poll, describing it as an extension of the army takeover. "Holding these elections is null and void under the military coup ... It cannot be legitimised by elections or in any other way," said Muslim Brotherhood member Mohamed Abdel Hafeez.