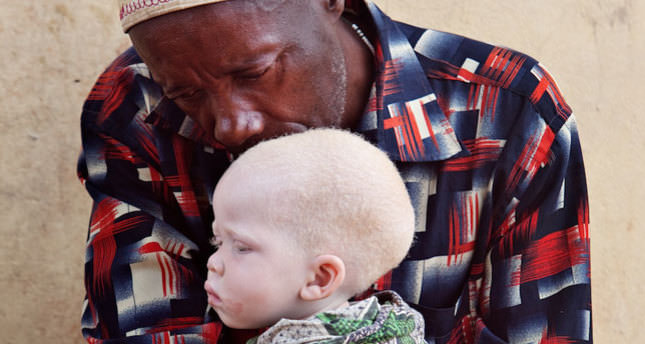 by AA May 30, 2014 12:00 am
DAR ES SALAAM, Tanzania — Turkey will open a center in Tanzania to protect albinos from being marginalized and oppressed following the recent wave of attacks against people suffering from the disorder, Turkish foreign minister said Friday.


"We will protect the albinos. Each of us could have been born as an albino. It is humanity's duty to protect them," Ahmet Davutoglu told a joint press conference with his Tanzanian counterpart Bernard Kamillius Membe in Dar es Salaam, Tanzania's capital.
A woman with albinism -- a hereditary condition characterized by the absence of pigment in the body -- was hacked to death in Tanzania on May 13 by two "witch doctors."
Albino killings in Tanzania are associated with witchcraft, as albino body parts are believed in some circles to have magical properties.
The latest murder brought to 73 the number of albinos killed in Tanzania since 2000.
"Children are always and everywhere innocent. Albinos of Tanzania are all the world's children," Davutoglu said.
Asked whether the latest developments in Africa would lead to terrorism in global scale, he said that the world had already been at the risk of global terrorism and that the international community should boost co-operation to prevent it.
Two Turkish citizens were killed in attacks that took place in Djibouti and in Somali recently.
Last Update: May 30, 2014 7:00 pm
RELATED TOPICS