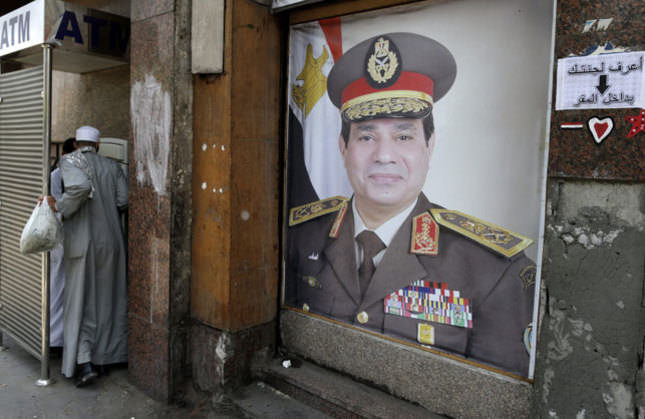 by Jun 03, 2014 12:00 am
CAIRO — Abdel Fattah al-Sissi is elected Egypt's president with 96.9 percent of the vote, the electoral commission announced Tuesday. Al-Sissi swept to victory in last week's election, less than a year after he deposed the country's first civilian head of state.

Now the 59-year-old former army chief, used to commanding a disciplined military, faces the challenge of running a country of over 80 million people struggling with political polarization and economic woes. Al-Sissi's image has been everywhere in Cairo in the past few months, but the man himself has rarely been seen in public. In his relatively few appearances, almost all at military events or on television, he has at times played the role of the disciplined and determined military man.

Soon after he deposed Mohammed Morsi in July, in the wake of massive demonstrations against the Muslim Brotherhood leader's year-long rule, he appeared on television to ask the public for a mandate to "fight terrorism."

Huge crowds thronged Cairo in response to his call, and 20 days later police smashed through protest sites where Morsi supporters had been camped out, killing over 700, according to official figures. At other times al-Sissi has wooed the public, speaking softly in Egyptian dialect rather than the formal classical Arabic of official events. "Don't you know, you are the light of our eyes?" he famously said in an address before the 40th anniversary of the October War against Israel.

After an election campaign that amounted to a televized address to announce his candidacy and a handful of interviews, the plans for his four-year term as president have not emerged in detail. Facing alienated Islamists and a secular youth protest movement that has complained bitterly about repression by the security services, he has shown little inclination to compromise.

Al-Sissi has made it plain that he sees no room in Egypt for the Muslim Brotherhood, now banned by the courts as a terrorist organization. "The problem is not with me. The problem is with the Egyptian people," he told interviewers during the campaign, insisting that the 85-year-old Islamist movement had "deeply wounded" the public during its year in power. And he did not appear open to amending a restrictive protest law that has seen some of the most prominent young leaders of the 2011 revolution against long-time leader Hosny Mubarak jailed.

Al-Sissi has been less clear on the other key issue facing his presidency - how to rejuvenate Egypt's stumbling economy, which has suffered gravely from the three years of instability since Mubarak fell. He clearly recognizes the scale and urgency of the challenge, and has talked of austerity measures and reducing subsidies - but in a way that spares the poor the worst of the impact. Details, however, have been lacking, with al-Sissi preferring to dwell on a grand plan that involves 22 new industrial zones, 26 tourist resorts and eight new airports, as well as massive land reclamation for agriculture.

Even this plan was only published well into the electoral campaign. Al-Sissi has said that a lack of communication with the public was a major failing of previous governments, but he himself seems to prefer a top-down approach that may reflect his military background. How well that experience will serve him in running Egypt remains to be seen. But at least, unlike his predecessor Morsi, al-Sissi takes power with the support of the most powerful elites in state institutions, business and the media.

Born in 1954, al-Sissi graduated from the Egyptian military academy in 1977. He climbed the ranks quickly, serving as defence attache in Saudi Arabia before returning to Egypt to command mechanized infantry forces. Al-Sissi earned degrees from Britain's staff academy in 1992 and the US Army War College in 2006. He headed military intelligence before Morsi appointed him defence minister shortly after taking the presidency in 2012.