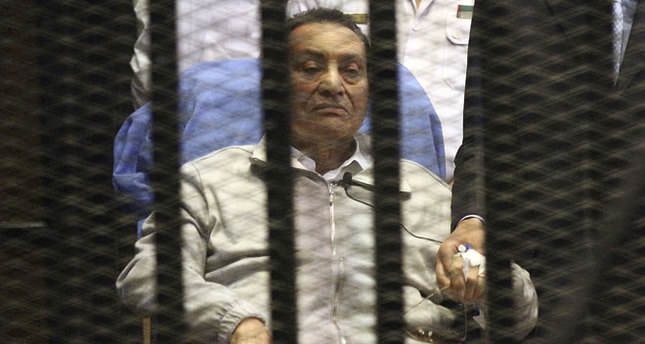 by AA Jun 09, 2014 12:00 am
CAIRO — An Egyptian court has adjourned to June 14 the trial of former president Hosni Mubarak, his interior minister and six top security officials accused of killing anti-regime demonstrators during Egypt's January 2011 uprising, a judicial source said Monday.
The defendants are charged with inciting the murder of hundreds of protesters during the 18-day uprising, which ended Mubarak's 30-year rule in early 2011.
According to the judicial source, the court adjourned trial proceedings to hear the defense team's argument.
Mubarak-along with his two sons and Egyptian business tycoon Hussein Salem-also faces charges of financial corruption, abuse of power, profiteering and exporting Egyptian natural gas to Israel at below-market prices.
In late 2012, Mubarak and long-serving interior minister Habib al-Adly were both sentenced to 25 years in prison for ordering the murder of anti-regime demonstrators during the 2011 uprising.
The court later ordered a retrial, however, after the former president's lawyers successfully appealed the jail sentence.
Last Update: Jun 09, 2014 5:22 pm
RELATED TOPICS