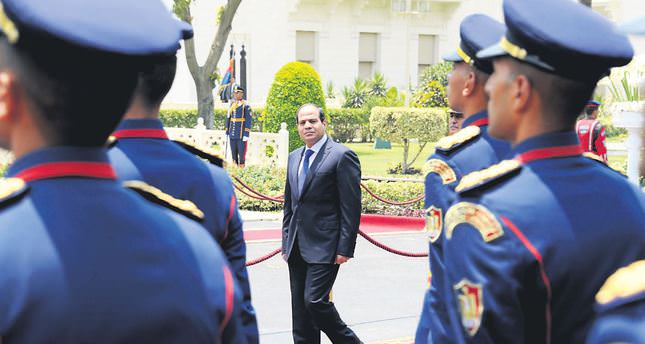 by Layla Hussein Jun 09, 2014 12:00 am
CAIRO — Abdel-Fatah el-Sissi, the former military chief who ousted Egypt's first freely elected leader and practically banned politics by declaring the Muslim Brotherhood a terrorist group while pressuring the rest of the opposition into obedience, is sworn in as the new president, one day
after 10 more activists were sentenced to death.

Cairo's main roads leading to the Supreme Constitutional Court were blocked on Sunday, an official holiday in preparation for former army chief Abdel-Fatah Sissi inauguration as the new president of Egypt after winning last month's presidential poll. "I swear to uphold the republican system and respect the constitution and the law," said Sissi, taking the oath of office to start his four-year presidential term.
The ceremony was attended by few representatives of Western allies, who were concerned by a crackdown on dissent since the Sissi ousted the elected leader Mohamed Morsi last year, while the Gulf Arab countries that backed the coup sent high level delegations to attend the ceremony.

Sissi, who had resigned his post as army chief to contest the presidential poll, was officially declared the winner of the national poll after winning almost 97 percent of the vote, according to Egypt's election commission.

Doubts surrounded voting results and turnout announced by the Egyptian authorities amid the majority boycott reported by several segments of society. The election is the second milestone of a transitional roadmap imposed by the army after the July ouster. The Egyptian street is split into two groups.

One expressed happiness through celebrating election results in several squares across Egypt and others express worry regarding the future of their nation. "We are worried about the daily life aspects with thousands of arbitrary detentions, deterioration of human rights conditions and the economic state. We can see Mubarak's regime in the prospects," said a couple of students at Cairo University who refused to publish their names for security concerns.

Sissi has set out an ambitious plan to develop agriculture, housing, education, and develop impoverished areas while encouraging
employment.

The plan, however, is vague to many experts, specifically concerning how the massive funds required would be raised for the country that is suffering from its worst economic crisis since the great depression. Since Sissi gave a series of television interviews, many Egyptians feel he has not spelled out a clear vision of how he would tackle Egypt's challenges, instead making a general call for people to work hard and be patient.

A new Pew poll has found widespread pessimism among Egyptians regarding the direction of the country and its institutions. According to the survey, a staggering 72 percent of Egyptians are currently dissatisfied with the direction their country is headed, compared to just 24 percent who are satisfied. The number of unsatisfied Egyptians has jumped 11 percentage points since last year, when then President Mohamed Morsi was removed from power in a military takeover.

The authorities have launched an all-out crackdown on Morsi's supporters and the members of his Brotherhood since his ouster, hundreds have died, thousands have been arrested and hundreds have been sentenced to death after speedy trials.
RELATED TOPICS