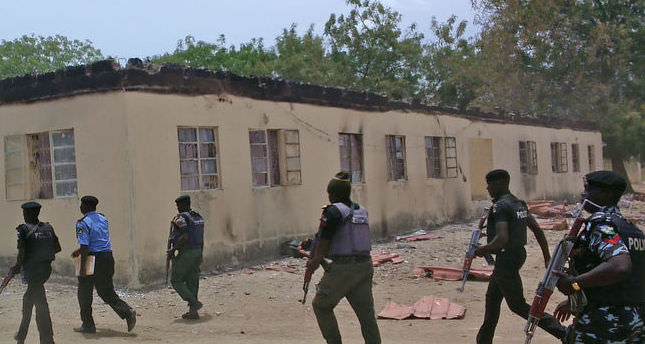 by Jun 29, 2014 12:00 am
Militants killed at least 10 people on Sunday in an attack on a Nigerian village less than 5 km. (3 miles) from Chibok, the scene of a mass abduction of more than 200 school girls in April, survivors said.

In a separate assault on Friday evening, the insurgents killed seven soldiers in the village of Goniri, in Yobe state, a security source and witnesses said.

Violence in Nigeria's northeast has been relentless in the past year, and has gained in intensity since April, the month that more than 200 schoolgirls were snatched by Boko Haram rebels from Chibok. Efforts to free them, which have attracted Western support, have so far not succeeded.

Samuel Chibok, a survivor of the attack on Kautikiri village, in the Chibok community, said that around 20 men in a Toyota pick-up truck and motorcycles rolled into town.

"Initially I thought they were military but when I came out, they were firing at people. I saw people fleeing and they burned our houses," he said, adding that some people had died in the attack, including two of his relatives.

"Smoke was billowing from our town as I left."

A local pro-government vigilante, who declined to be named, said residents had so far recovered 10 bodies from the village.

Boko Haram, which is allegedly fighting in northern Nigeria, has killed thousands since launching an uprising on 2009, and many hundreds in the past three months.