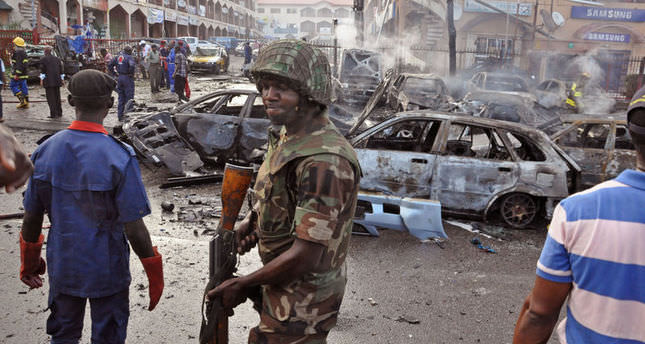 by Jul 01, 2014 12:00 am
A bomb blast hit a busy market in northeast Nigeria on Tuesday, killing at least eight people, and troops announced the arrest of a businessman suspected of helping militants to carry out attacks including the kidnap of over 200 schoolgirls.

Witnesses said the explosion of a suspected vehicle bomb on a road adjoining the market in the Borno state capital of Maiduguri wrecked cars and taxis which were unloading passengers and wares. They said a suicide bomber carried out the attack.

"I saw police and troops picking out victims," said Alakija Olatunde, a student who rushed to the scene.

An attendant at Maiduguri General Hospital said eight bodies had been brought in by civilian volunteers.

There was no immediate claim of responsibility, but the Boko Haram group, which says it is fighting to establish a state in Africa's biggest economy, has claimed past bombings and shootings in Maiduguri and across northern Nigeria.

A year-old government military operation against Boko Haram has so far failed to crush the rebels, whose insurgency has killed thousands since 2009, destabilizing much of the northeast of Africa's top oil producer.

The April abduction of 276 school girls from Chibok, 219 of whom remain in captivity, has become a symbol of the powerlessness of President Goodluck Jonathan's government to protect its civilians.