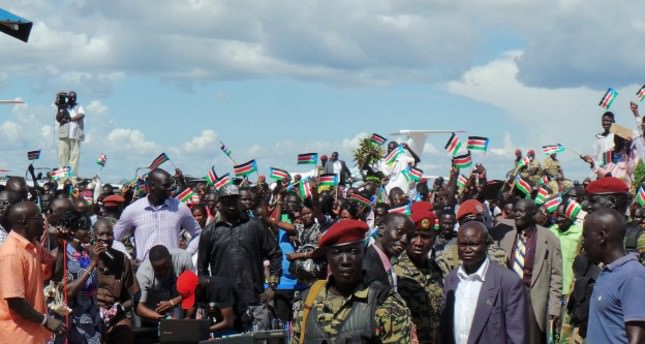 by AA Jul 05, 2014 12:00 am
The South Sudanese army on Friday said that fighting was ongoing in the northern Unity State following attacks on army positions by rebel forces loyal to sacked vice-president Riek Machar, going on to accuse the rebels of violating a ceasefire deal signed earlier with the Juba government.

"This signifies their continuous violation of the ceasefire agreement" signed in Addis Ababa on May 9, he said.

Aguer said details of the attack were still scanty, but stressed that the rebels were being repulsed.

"We do not yet have the details, but we shall give it soon. We are repulsing them," he said.

"This comes after the attack in Mayinjur in Warrap State last night, where eight SPLA soldiers were killed and 11 wounded," Aguer added.

"We later chased them and captured several of them; we are keeping 17 prisoners of war at the headquarters of Gen. Mathew Puljang in Mayom [in Unity State]," said the spokesman.

Aguer also said the army remained on high alert for a possible attack on Nasir in Upper Nile State.

"They are preparing attacks on Nasir. The SPLA is committed to fight in this case, but we are also committed to the ceasefire agreement," he added.

Hundreds of thousands of South Sudanese have since been displaced in subsequent fighting, while large swathes of the population remain on the brink of humanitarian catastrophe.

The warring rivals signed a peace deal in May following a January cessation-of-hostilities agreement. Neither deal, however, has succeeded in curtailing hostilities.
Last Update: Jul 05, 2014 2:10 pm
RELATED TOPICS