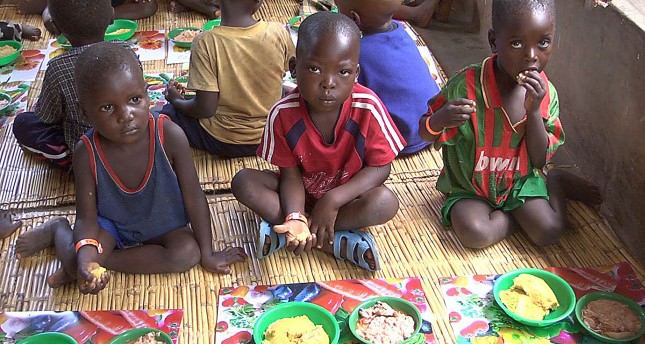 by AA Jul 06, 2014 12:00 am
The Muslim communities dotted across Zambia on Sunday donated assorted gifts including foodstuff to needy communities including schools, hospitals and prisons.

In Lusaka, the donation that was made in the form of food hampers including cooking oil, mielie-meals, and other edible items were donated to three major prisons: Chimbokaila and Kamwala remand prisons and Mwambeshi Maximum prison for convicts.

"Although the primary beneficiaries of these gifts are our Muslim brothers and sisters whose cases are still pending and are remanded in prisons and those who have already been convicted, others will get gifts such as food hampers, irrespective of the religion they belong to," Islamic Council of Zambia Council Secretary-General Sheik Shaban Phiri told Anadolu Agency.

Phiri clarified that all the donations made by individual wealth Muslim communities and families were on a voluntary basis. "Even those who did not have anything to donate took it upon themselves to organize fundraising ventures where they raised funds to contribute to the common donation basket," he added.

The scholar went on to say that the aim of the campaign is not only to help Muslims, but also to reach out to the non-Muslim communities nationwide.

"Our target is to ensure that our general publics who do not have the basic necessities and are in need of the general livelihood are assisted. It is our prayer and hopes that all well-wishers in our communities continue contributing in this noble work of helping the poor in our societies-not only here in Lusaka but also elsewhere in the country," he said.

Other than these donations, Phiri observed during this month of Ramadan, the communities will undertake various projects, including drilling and sinking of boreholes in compounds where water is difficult to access.

"Water will not only benefit communities, but everyone living in these communities. So far, the Muslim society has already sunk about 10 boreholes in five compounds where people have difficulties in accessing it."

"For example, when we have enough funds left, we will buy some materials to build and renovates some damaged school infrastructures in selected school compounds."

Phiri noted that these projects are not only taking place in Lusaka during this holy month of Ramadan, but across Zambia where there are active Muslim communities.

"Islam teaches all Muslims to spend their money to helping the poor. It is for this reason these gifts we have in front of us been bought. Moreover, these food hampers have not been bought by one sponsor. What you are seeing here is happening across the country."

"The only difference is that, the donation, here is being made in prisons whereas in some places, the donations are made in hospitals and communities where the needy people including orphanages and homes for ages persons," he added.

He indicated that at times his organization struggles to convince donors to support "intangible" activities like capacity-building or empowerment, over these more tangible causes.

"One thing is clear," said Phiri. "Around the Muslim world, there is an increased awareness that if `zakat' [almsgiving] distribution and management is made effective, we can bring revolutions in terms of development - not only for the Muslims, but all people around the world."