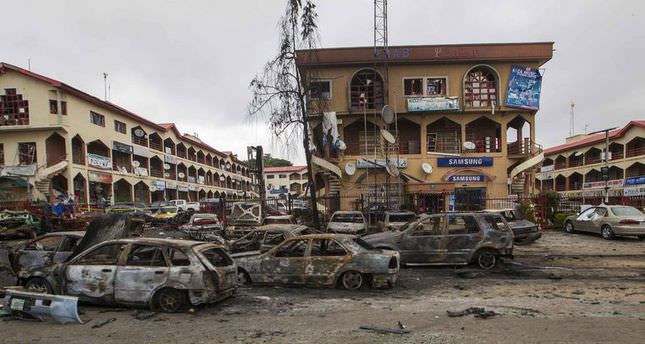 by Jul 13, 2014 12:00 am
Boko Haram leader Abubakar Shekau has claimed responsibility for two explosions on June 25 at a fuel depot in Lagos, Nigeria's commercial hub, AFP reported on Sunday, which, if true, would be the first recorded attack on the city by the militants.

"A bomb went off in Lagos. I ordered (the bomber) who went and detonated it," Shekau said, according to the French news agency, which is usually the first to get hold of Shekau's videos before they are distributed online.

The two blasts minutes apart last month in the country's main port, Apapa, were almost certainly caused by bombs, three senior security sources and the manager of a major container company told Reuters. One was most likely the work of a female suicide bomber, they said.

Authorities said the blasts on Creek road were an accident caused by a gas canister, but the security sources told Reuters that was a coverup meant to avoid panic in the southwestern city of 21 million people. At least two people were killed.

"You said it was a fire incident. Well, if you hide it from people you can't hide it from Allah," Shekau says in the video, which according to AFP shows him next to at least 10 gunmen in front of two armoured personnel carriers and two pickup trucks.

A confirmed attack by Boko Haram would be a cause for concern. Lagos is both an international business hub and a usually peaceful but at times uneasy melting pot of ethnicities from the mostly Christian south and Muslim north that have fought street battles in the past.

The target of the Lagos bombs was a fuel depot. Had it gone up, it could have caused a massive chain explosion and disrupted Nigeria's mostly imported fuel supply.

Security sources say it may have been the work of a group or individual inspired by Boko Haram. Shekau has been known to claim attacks suspected to be the work of another militant group or a criminal gang.

Shekau gets the Governor of Lagos State wrong, taunting Adams Oshiomole, who is in fact the Governor the southern Edo State, the agency reported.