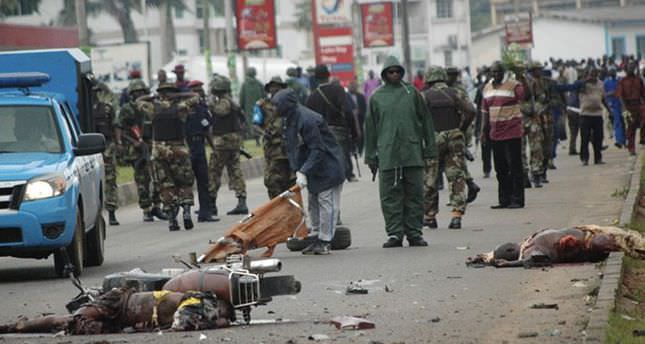 by AA Jul 29, 2014 12:00 am
At least eight people have been killed in a fresh militant attack in Nigeria's northeastern Yobe State, a military source said on Tuesday.
Militants from Boko Haram group stormed the Katarko town, about 25km from Damaturu, the provincial capital of northeastern Yobe state, and shot dead eight people, the source told Anadolu Agency.

A town resident, Illiyasu Zanna, said that insurgents had arrived in Katarko at about 7:30 pm local time on Monday.

"Eight people died in the attack and about 12 people sustained injuries from gunshots. Some people who fled in the midst of the confusion were also injured after falling down," he said.
Zanna said the insurgents first attacked a military base at the town's outskirts before they gained access to the town, throwing explosives into houses and shooting at residents while attempting to flee their homes.

Katarko is a small community in Gujba Local Government along a major highway in the area, south of Yobe, also known as one of Boko Haram stronghold.

Last year, Boko Haram claimed responsibilities for two major attacks in the area, including an attack on a college, in which over 40 students were killed, and another attack that left over 60 students dead.

Boko Haram, which means "Western education is forbidden" in Nigeria's local Hausa language, first emerged in the early 2000s preaching against the government misrule and corruption.

In the five years since, the shadowy sect has been blamed for numerous attacks-on places of worship and government institutions-and thousands of deaths.
Last Update: Jul 29, 2014 2:45 pm
RELATED TOPICS