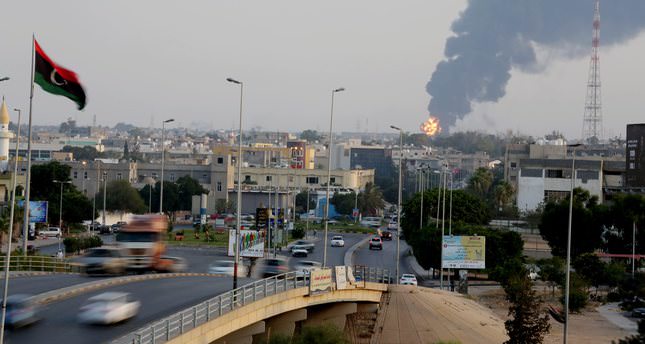 by AA Jul 30, 2014 12:00 am
A self-styled group of Libyan militants on Tuesday overran a military garrison that formerly belonged to the Libyan army in the eastern city of Benghazi, following a violent showdown.

The militant group is made up of members of the Islamist Ansar Al-Sharia militia and the Benghazi Revolutionary Shura Council.

A leader of the council stated that his fighters had managed to capture the garrison, having controlled five more Libyan army garrisons in Benghazi the past few days.

A Libyan army officer, meanwhile, confirmed the capture of the garrison by the militants.

"We had to pull out of the garrison, because we had not received any reinforcements for two weeks," the officer said.

"Even with this, the battle has not come to an end yet," he said on condition of anonymity.

The Libyan government had earlier called on warring parties to suspend their hostilities.

It added in a statement that it held a meeting in northern Libya on Tuesday to discuss means of bringing about ceasefire and a comprehensive deal in Benghazi.

Even with this, thunder from the launching of missiles continues to be heard in different parts of the eastern Libyan city.

Clashes have been ongoing in Benghazi since July 14 between the Libyan army, which backs operations carried out by retired Libyan general Khalifa Haftar, on one side and the so-called Libya's Revolutionary Shura Council, which is backed by the Ansar Al-Sharia militia.

Libya has been in turmoil since a bloody uprising ended the autocracy of long-serving ruler Muammar Gaddafi in 2011.
RELATED TOPICS