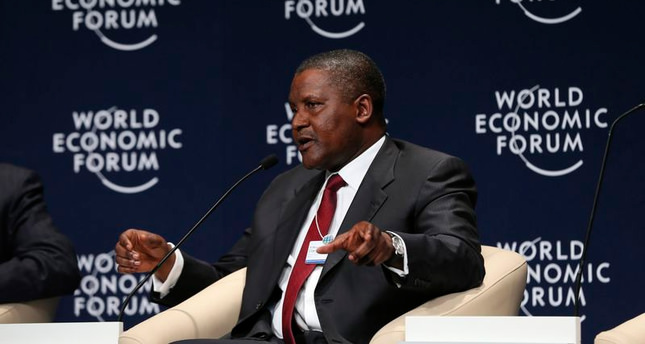 by AA Aug 02, 2014 12:00 am
The Nigerian government has signed a $1 billion rice investment deal with the firm of Nigerian mogul Aliko Dangote, Africa's richest man.

"President Goodluck Jonathan said the Dangote Group's investment is the single largest investment ever made in rice production in Africa," presidential spokesman Reuben Abati said in a statement Friday.

"He [President Jonathan] thanked Alhaji Dangote for investing in agriculture and assured him that his investment will be worthwhile," he added.

The deal was signed by Dangote and Nigerian Agriculture Minister Adewunmi Adesina.

President Jonathan said Nigeria plans to be self-sufficient in rice production and a net exporter of the commodity.

"In less than four years, Nigeria hopes to become a net-exporter of rice," the statement quoted the president as saying.

Dangote is a major investor in the Nigerian economy - rated as Africa's biggest - and has made inroads into other countries in West Africa.

Listed by Time magazine as one of the world's top 100 most influential personalities, he currently owns a $25 billion cement factory sited across different parts of Nigeria.

Dangote, once ranked by Forbes Magazine as the world's 23rd richest man, is believed to be the largest employer of labor in the country.

The Nigerian entrepreneur is the founder of the Dangote Group, a continental business empire spanning multiple fields, including textiles, cement, sugar, flour, salt, banking and, recently, oil, telecommunications and petrochemicals.

Dangote is thought to have launched his vast business empire with a modest loan of 500,000 Nigerian naira (roughly $3,000) from his maternal uncle.

He went on to establish his own business in 1977.

But Dangote faces criticism at home for nurturing his business empire amid what critics call "unfair monopoly and government patronage"-a reference to his near-monopolies on cement imports and sugar distribution to the country's breweries and confectioners.

He is known for making sizable donations to numerous causes, from religion and education to other social causes worldwide.

Though not a politician, Dangote is said to be among Nigeria's most influential political financiers, especially for politicians from President Jonathan's ruling party.

He is a holder of Nigeria's second highest honor, the Grand Commander of the Order of the Niger.

Dangote is the first and only non-politician in Nigeria's history to have been awarded the prestigious title.