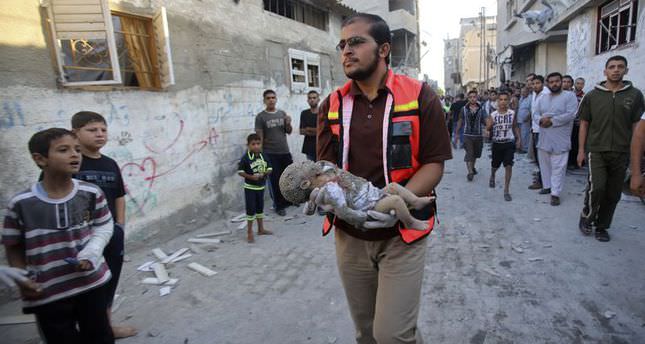 by AA Aug 04, 2014 12:00 am
A South African humanitarian aid organization, Gift of the Givers, is planning a relief mission to the besieged Gaza Strip to help victims of the ongoing Israeli onslaught on the coastal enclave.

"We want to assist," Dr. Imtiaz Sooliman, the founder and chairman of the foundation, told Anadolu Agency in an exclusive interview at his offices in Bramley, north of Johannesburg.

"We have got a medical team; a search and rescue team; medical equipment; medicines and a whole range of other items," he added.

Sooliman said the South African government was supporting the foundation's mission and they were busy negotiating with the Egyptian government to open the Rafah border crossing for them.

"For now we are waiting for permission from the Egyptian government," he added.

Israel has been pounding the Gaza Strip-home to 1.8 million people-since July 7 with the stated aim of halting rocket fire.

At least 1766 Palestinians, mostly civilians, have been killed and 9320 others injured in the ongoing Israeli war on the Gaza Strip.

The doctor said his organization has received responses from over 150 highly-trained medical professionals and specialists who want to go and help the suffering people of Gaza.

But for now they will be taking 45 volunteers while the 150 remaining will be on standby.

Sooliman said they will be taking 16 tons of much needed supplies to the besieged Gaza Strip to help the war victims.

The charity will also be taking a new ambulance to Gaza in addition to medicine, and medical equipment.

He said it was the first time that the charity was taking a search and rescue team on its mission.

"It's for the first time in our 22 years history that we will take a search and rescue team to help people trapped under the rubble and find bodies," added Sooliman.

Asked if they were not afraid of the war in Gaza, he cited previous relief involvement in the Palestinian territory in the past.

"In 2009, when the war was ending, we entered Gaza while the bombs were still falling," Sooliman recalled.

He noted that his organization has been to many disaster areas such as Lebanon, Syria and Bosnia providing relief and medical assistance to war victims.

"Our teams are trained and ready to enter war zones," Sooliman said.

"But even if the team was not ready, the situation in Gaza demands response," he asserted.

"On the 8th of July when the war started, we had teams in Gaza who purchased medical supplies and food items which they have been distributing until now," Sooliman said.

Funding for the Gift of the Givers foundation comes from donations from the South African population and business.

The charity also works extensively with the South African government in its relief efforts and numerous projects locally and internationally.