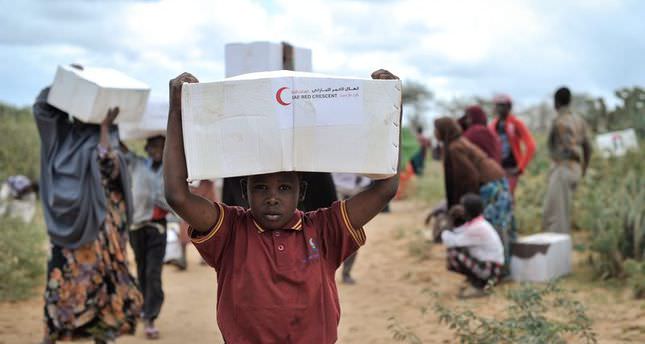 by Aug 05, 2014 12:00 am
Somalia's government begged for help Tuesday, warning the war-torn nation once again faced a hunger and drought catastrophe three years after famine killed more than a quarter of a million people.

"Drought has already reached several regions in Somalia," the government said in a statement, warning that "it anticipates that the situation will continue to deteriorate".

"The aid in form of food, water and medication must urgently reach the affected population," the statement added.

Last month the UN warned Somalia is sliding back into an acute hunger crisis, with parts of the capital Mogadishu facing near famine-level shortages and aid organisations unable to meet the needs of some 350,000 displaced people there.

"All members of parliament are calling on the international community and the United Nations to assist... to prevent the return of the deadly humanitarian crisis of the 2011 famine," the government said.

Somalia's internationally-backed government, selected in 2012, was widely hailed as offering the best chance in decades to repair the war-ravaged country.

UN assessments show "above emergency levels of malnutrition" in seven towns, including the major centres of Garowe, Gal kayo and Kismayu, with the "highest deterioration" reported in Mogadishu.

Reports of a hunger crisis inside the capital casts a further pall over the government's record following accusations of corruption and continued attacks by Sheba insurgents in even the most well-protected areas.

Thousands displaced by war live in basic makeshift shelters in Mogadishu, where Al-Baeda-linked Shebab fighters continue to launch regular attacks, including brazen commando raids on the presidential palace and parliament.

The hardline Shebab, which once controlled most of southern and central Somalia, has been driven out of positions in Mogadishu and Somalia's major towns by a 22,000-strong African Union force.