Egyptians mark the first anniversary of the Rabaa massacre 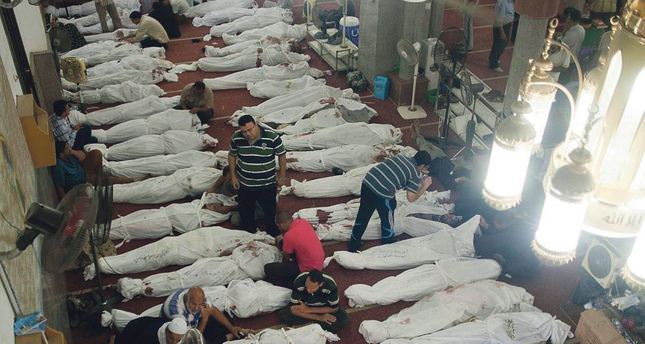 A year ago, Egyptian forces fired on pro-Morsi supporters with live ammunition and left more than a thousand dead. A recently released report by HRW cites human rights violations committed by the forces

It was one year ago when Egypt witnessed a massacre that was unprecedented in its history. Egyptian security forces fired on people with live ammunition killing many. Huge crowds were in Rabaa Square protesting the military coup and around 6:00 a.m. protesters were praying in the square and in Adawiyya Mosque, which was heavily damaged by government forces.

On July 3, 2013 the first democratically elected president of Egypt, Mohammed Morsi was toppled after a bloody military coup, headed by the incumbent President and former General Abdel-Fattah el-Sissi. Morsi was accused of deteriorating the Egyptian economy, aiding Hamas, spying for certain countries and polarizing society. People who were against Morsi and the Muslim Brotherhood went to the streets at the end of June to protest the Islamist government. After the protests started, the army sided with the protesters and gave an ultimatum to Morsi that said he had to resign in two days. Morsi stressed the fact that he was elected and only another election could remove him. The army did accept Morsi's argument of being elected. While the tension escalated in Cairo among different factions and the army, the people on the streets also expressed different demands. The sit-in protests to show solidarity with Morsi started even before the anti-Morsi protests. Despite the support of the masses the army overthrew Morsi and his cabinet, violating the constitution and universal democratic values.

Morsi and many other prominent political figures that were also either members of the Muslim Brotherhood or related to it were arrested. Pro-Morsi and pro-democracy protesters did not leave the streets. They chanted slogans against Sissi and the coup. Sissi claimed that the protesters were threating national security while making a call to his supporters to go to Tahrir Square. Sissi finally gave the order to clear Rabaa Square, which had become the pro-Morsi protesters' main area. Aug. 14, 2013 has been called one of the worst days in Egyptian history.

The security forces arrived in the morning to clear the square and blocked all the entrances and exits from 6:00 a.m. until 6:00 p.m., according to eye witnesses. Daily Sabah spoke to two of the witnesses to document the day.

Yamen Zakarya, 20, said, "I was at the Rabaa media center on the Aug. 14 at 6:00 a.m. when they informed me that the army would attack soon. I decided with two of my friends to stay, we went out and had our tea. Then we found the tanks starting to block the three entrances of the square at 7:00 a.m. I remember the view around the entrances. It was like a battle, we thought we should stay to help the other protesters by hurling stones and helping the injured. But of course we could not. We were getting shot at directly and we could not reach anyone to whom we could resist. Most of the time we were lying on the ground to protect our heads. One of my friends got injured and I went looking for him at Rabaa Hospital and I saw Asmaa el-Baltagy dead there. [Asmaa al-Baltagy was killed at the age of 17 and was the daughter of Mohammed el-Baltagy, one of the Muslim Brotherhood's top officials. You can read Mohammed el-Baltagy's letter to Asmaa al-Baltagy at the end of this article.] What I saw on that day was only death. I do not participate in protests anymore as I started believing that we should change our mentalities, tools and cooperate more to get rid of this coup."

A.N., 19, speaking on the condition of anonymity due to security reasons, witnessed the same moment while he was blocked outside the square and was trying to enter to help his loved ones. He said "It was 7:00 a.m. and I went there with my father and brother. We were trying to help our friends that were trapped inside. Yet police forces stopped us at the beginning, firing gas bullets only. But later they had strong back up and at 9:00 a.m. I saw with my own eyes a bullet killing a man. We had nothing in our hands but some rocks. At 12 o'clock I saw some snipers wearing police uniforms on the roof of a civilian building. They started firing on us, bullets were everywhere, blood covered the streets and we tried to reach inside the whole day until my brother was shot by a bullet in the back. He was treated by some doctors in a nearby mosque. It was such a bloody day. I was in shock and in the streets nobody believed what was happening. Every minute I was learning that another friend was killed, injured, lost or captured."

The systematic and widespread killing of at least 817 demonstrators by Egyptian security forces in July and August 2013 probably amounts to crimes against humanity, Human Rights Watch (HRW) said in a report released on Tuesday, based on a year-long investigation. The 188-page report titled, "All According to Plan: The Rab'a Massacre and Mass Killings of Protesters in Egypt," documents the way Egyptian security forces fired on crowds. "In Rab'a Square, Egyptian security forces carried out one of the world's largest killings of demonstrators in a single day in recent history," said Kenneth Roth, executive director of HRW. "This wasn't merely a case of excessive force or poor training. It was a violent crackdown planned at the highest levels of the Egyptian government. Many of the same officials are still in power in Egypt, and have a lot to answer for." HRW interviewed more than 200 witnesses, including protesters, doctors, local residents and independent journalists, visited each of the protest sites during or immediately after the attacks began and reviewed physical evidence, hours of video footage and statements by public officials. HRW wrote to relevant Egyptian ministries soliciting the government's perspective on these events, but received no responses.

The Rabaa massacre has ignited anger around the world and today thousands of people not only in Egypt, but also from Turkey to Indonesia, organize demonstrations to condemn the bloody attack on the peaceful and unarmed protesters. While the Muslim Brotherhood claims that the death toll was more than 1,500, the HRW report said there was a minimum of 817 deaths.

My beloved daughter and dignified teacher Asma al-Beltaji; I do not say goodbye to you; I say tomorrow we shall meet again.

You have lived with your head held high, rebellious against tyranny and shackles and loving freedom. You have lived as a silent seeker of new horizons to rebuild this nation to assume its place among civilizations.

You never occupied yourself with what preoccupies those of your age. Even though traditional studies failed to fulfil your aspirations and interest; you have always been the first in your class.

I have not had enough of your precious company in this short life, especially that my time did not allow me to enjoy your companionship. The last time we sat together at Rabaa Al Adawiya square you asked me "even when you are with us you are busy" and I told you "it seems that this life will not be enough to enjoy each other's company so I pray to God that we enjoy our companionship in paradise."

Two nights before you were murdered I saw you in my dream in a white wedding dress and you were an icon of beauty. When you lay next to me I asked you "Is it your wedding night?" You answered, "It is in the noon not the evening". When they told me you were murdered on Wednesday afternoon I understood what you meant and I knew God had accepted your soul as a martyr. You strengthened my belief that we are on the truth and our enemy is on falsehood.

It caused me severe pain not to be at your last farewell and see you for the last time; not to kiss your forehead; and not be honoured to lead your funeral prayer. I swear to God, my darling I was not afraid for my life or from an unjust prison, but I wanted to carry the message you scarified your soul for; to complete the revolution, to win and achieve its objectives.

Your soul has been elevated with your head held high resisting the tyrants. The treacherous bullets have hit you in the chest. What spectacularly determined and pure soul. I am confident that you were honest to God and He has chosen you among us to honour you with sacrifice.

I do not say goodbye, but I say farewell. We shall meet soon with our beloved Prophet and his companions in Heaven where our wish to enjoy each other's company and our loved ones' company will come true.