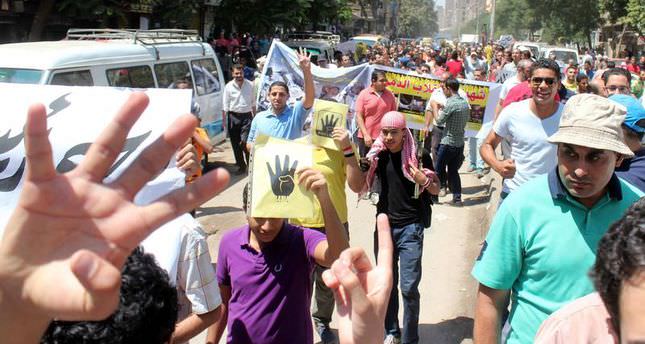 by AA Aug 15, 2014 12:00 am
Three Egyptian protesters were reportedly killed Friday during rallies staged by supporters of ousted president Mohamed Morsi marking the passage of one year since the bloody dispersal of two pro-Morsi protest camps in Cairo and Giza.

A 24-year-old protester was killed by gunfire by security forces on Al-Haram Street in the Giza province, a source with the National Alliance for the Defense of Legitimacy, Morsi's main support bloc, said.

A local resident who was not participating in the rally was also killed, the source said.

Friday's protests were called by the pro-Morsi alliance to mark the first anniversary of the killing of hundreds of pro-Morsi protesters when security forces violently cleared their twin sit-ins in Cairo's Rabaa al-Adawiya Square and Giza's Nahda Square.

On Thursday, at least seven protesters were killed when security forces dispersed rallies marking the anniversary, according to sources from the pro-Morsi alliance.

Egypt's Health Ministry, however, said that only four deaths had been confirmed, including that of a policeman.

Morsi, a Muslim Brotherhood leader who won Egypt's first free presidential election in 2012, was ousted by the military in July of last year following protests against his single year in office.

Former army chief Abdel-Fattah al-Sisi, widely seen as the architect of Morsi's ouster and subsequent imprisonment, was declared winner of a presidential poll conducted in May.