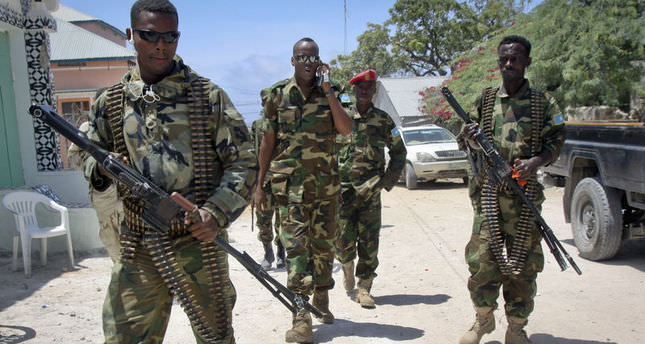 by AA Aug 17, 2014 12:00 am
The Somali government on Saturday asked warlords and clan militias to hand over their arms to the authorities or face harsh punishment.

In an extraordinary meeting that was attended by President Hassan Sheikh Mohamud and Prime Minister Abdiweli Sheikh Ahmed, the Somali cabinet ratified the recently launched disarmament operation in the capital Mogadishu.

"The cabinet agreed that all arms possessed by civilians be surrendered or registered with the Ministry of National Security," National Security Spokesman, Mohamed Yusuf, told Anadolu Agency.

"Failure to do so will lead to the confiscation of the weapons and punishment," he added over the phone.

Information Minister, Mustafa Duhulow, meanwhile, said in a statement that the cabinet had agreed to ban independent militia groups, clan militias and organized armed groups in the capital Mogadishu.

"According to the law, the National Security Forces and anybody licensed to hold light arms is legally allowed to hold them, but anybody else is not allowed to do so," Duhulow added.

The cabinet also decided to take stern action against media outlets that incite the public and threaten national security.

On Friday, two radio stations were taken off the air by the authorities for allegedly inciting the public through their reports on the disarmament mission.

The cabinet meeting came only a day after 12 people, mostly civilians, were killed when fighting broke out between a militia affiliated to a former Mogadishu District commissioner, on one hand, and African Union troops, on the other.

The former commissioner had mistakenly thought that the African Union troops were on a mission to confiscate his weapons. Twenty militiamen were arrested and a cache of weapon was confiscated.

Last week, the government-with help from African peacekeepers-launched the disarmament operation that has so far seen two major weapons cache confiscated from civilians.

Somalia has been awash with illegal weapons since it slid into anarchy in 1991 with the ouster of president Siad Barre.
Last Update: Aug 17, 2014 1:03 pm
RELATED TOPICS