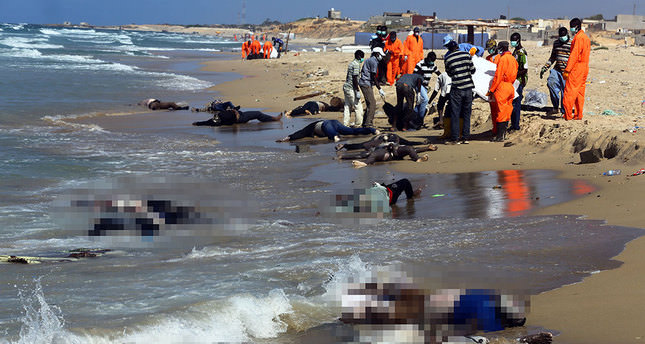 by Aug 26, 2014 12:00 am
Libyan rescuers have recovered the bodies of around 170 people after a boat carrying illegal migrants from sub-Saharan Africa sank at sea last week, a coast guard official said Monday.

"We freed about 100 bodies trapped in the hold of the 16-metre (50-foot) wooden boat which foundered not far from the coast," Abdellatif Mohammed Ibrahim told AFP.

Another 70 bodies were washed up by the tide, including five young children, he said.

"It looks like the boat overturned suddenly, leaving the passengers no chance," he said as Red Cross rescuers pulled bodies from the water.

Ibrahim said no leaks were found in the hull of the vessel, shipwrecked off the coast of Guarabouli district, 60 kilometres (40 miles) east of Tripoli.

In the absence of documentation, rescue workers have been unable to make a list of victims or establish their nationalities.

But the few papers recovered showed the victims included migrants from Ethiopia and Eritrea.

On Friday, the coast guard said it had saved 16 people and recovered 15 bodies.

He said on Monday that recovery of the remaining bodies was slow because the coast guard service has "a major shortage of resources."

Libya, mired in unrest and political chaos, has been a launchpad for illegal migrants seeking a better life in Europe but who turn to people smugglers to cross the Mediterranean.

Since the end of July, dozens of people who have set off on rickety boats from the Libyan coast have died at sea, and dozens more have gone missing, presumed drowned.

Around 150 Syrians were arrested on Sunday in Algeria, where they were preparing to enter Libya illegally in the hope of crossing to Europe, an Algerian newspaper reported.

Last Thursday, Tunisian fishermen rescued 75 migrants who had been drifting at sea for five days after leaving Libya aboard an inflatable in an attempt to reach Italy.

Earlier this month, Tunisian coastguards intercepted 90 African migrants whose makeshift boat heading from Libya for the Italian island of Lampedusa broke down off Zarzis.