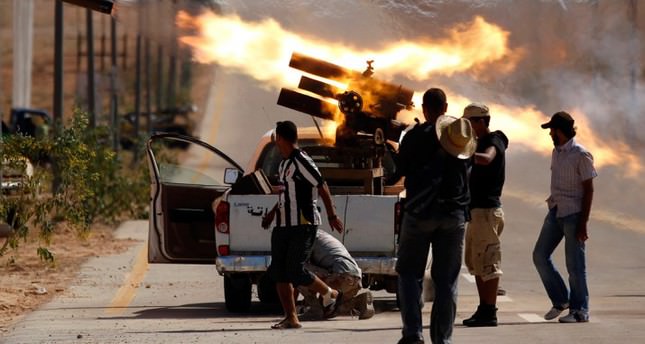 by Daily Sabah Sep 02, 2014 12:00 am
During the heavy fighting between a group of militias called The Benghazi Revolutionary Shura Council and rival militias loyal to renegade General Khalifa Haftar, a total of 31 people on both sides were killed, according to a Libyan security official who spoke to the Associated Press news agency on the condition of anonymity. Haftar's jets reportedly pounded rival militias' positions as militiamen responded with artillery. The clashes erupted on Monday and concentrated around the Benina International Airport, located in the eastern city of Benghazi.

The Benina International Airport, the second largest in the country after Tripoli International Airport, has played a crucial role in clashes due to its strategic location. It has become a top target for militant groups as much of the fighting has been taking place around the airport. Due to security measures, all flights to the airport have been suspended since July17.

Apart from the eastern city of Benghazi, Tripoli has also suffered from the escalating violence due to increasing clashes between rogue brigades for control of Tripoli International Airport, another strategic point that led to an all-out battle for control of the entire capital city. The two main armed militias, Zintanis and Misratans, have been fighting in order to seize control of key installations, especially the international airport, another top target for both brigades. The Tripoli airport has been of crucial importance due to the fact that it allows the militia groups to easily access the city center, which means greater control over all of Tripoli.

Since the ouster of long-ruling dictator Moammar Gadhafi, Libya has been suffering from chronic government instability.The Libyan government has long been at the mercy of rogue brigades as the central government has not had enough power to gain control over its territories.