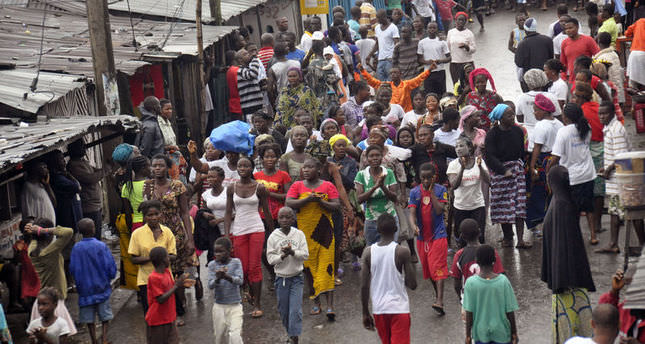 by Sep 02, 2014 12:00 am
The world's worst Ebola epidemic has put harvests at risk and sent food prices soaring in West Africa, the U.N. Food and Agriculture Organization (FAO) said on Tuesday, warning the problem would intensify in coming months.

The FAO issued a special alert for Liberia, Sierra Leone and Guinea, the three countries most affected by the outbreak, which has killed around 1,550 people since the virus was detected in the remote jungles of southeastern Guinea in March.

Restrictions on people's movements and the establishment of quarantine zones to contain the spread of the hemorrhagic fever has led to panic buying, food shortages and price hikes in countries ill-prepared to absorb the shock.

"Even prior to the Ebola outbreak, households in some of the most affected areas were spending up to 80 percent of their incomes on food," said Vincent Martin, head of an FAO unit in Dakar which is coordinating the agency's response.

"Now these latest price spikes are effectively putting food completely out of their reach," Martin said in a statement, adding the food crisis could hinder containment of the disease, which is typically spread via the bodily fluids of the sick.

Rice and maize production will be scaled back during the fast-approaching main harvest season as migration and movement restrictions cause labor shortages on farms, FAO said.

Cash crops like palm oil, cocoa and rubber will be seriously affected, squeezing the purchasing power of many families, who will also lose income and nutrition due to the ban on bush meat.

Border crossing closures and the reduction of trade through seaports have tightened food supplies in the three countries, which are all net cereal importers, and propelled prices upwards, exacerbated by higher transport costs.

The U.N. World Food Programme and FAO have approved an emergency program to deliver 65,000 tonnes of food to 1.3 million people affected by Ebola over a three-month period.

The price of cassava at a market in the Liberian capital Monrovia rose 150 percent in the first weeks of August, the FAO said, adding that currency depreciation in Sierra Leone and Liberia was likely to force prices up further.