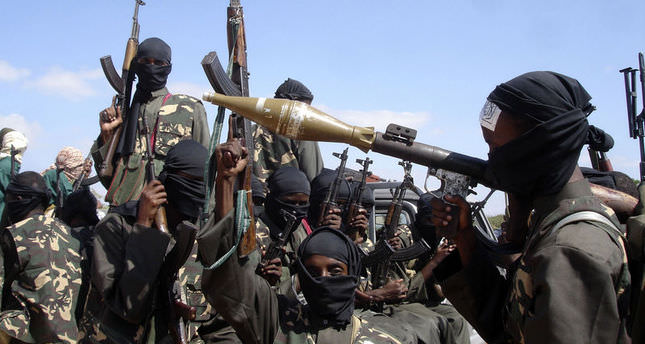 by Sep 02, 2014 12:00 am
U.S. forces have carried out airstrikes against the leader of Somalia's al-Qaida-affiliated al-Shabab rebels.Casualties were reported but uncertainty still hangs over the fate of the main target, officials said Tuesday. The Pentagon confirmed an operation was carried out on Monday against the hardline militia, and that it was "assessing the results." "The Americans carried out a major airstrike targeting a gathering by senior al-Shabab officials, including their leader Abu-Zubayr," said Abdukadir Mohamed Nur, governor of southern Somalia's Lower Shabelle region. Abu-Zubayr is the often used name for al-Shabab's supreme commander Ahmed Abdi Godane, listed by the U.S.

State Department as one of the world's eight top terror fugitives. Washington has carried out a series of drone strikes in the past including attacks reportedly targeting Godane. "We are assessing the results of the operation and will provide additional information as and when appropriate,"
Pentagon Press Secretary Rear Admiral John Kirby said in a statement.

Al-Shabab said they did not want to comment on possible casualties or the fate of Godane. The air strike came days after African Union (AU) troops and government forces launched Operation Indian Ocean, a major offensive aimed at seizing key ports from the rebels and cutting off one of their
key sources of revenue - the multi-million dollar export of charcoal.

Shabab fighters have largely fled in the face of the advance, and Nur said the airstrike was targeting Shabab commanders as they gathered for a meeting. "They were meeting to discuss about the current offensive in the region," Nur said. "There were casualties inflicted on the militants, but we don't have details so far." Nur said the strike hit a Shabab hideout used as a training camp for suicide bombers in remote villages of the Lower Shabelle region, south of the capital Mogadishu - the seat of Somalia's internationally-backed but fragile government.

On Saturday the African Union Mission in Somalia (AMISOM) said it had captured the town of Bulomarer, some 160 kilometers southwest of Mogadishu.AMISOM and Somali government troops were also seen on roads leading to Barawe, the last major port held by Shabab militants on Somalia's Indian Ocean coast.

U.S. Special Forces in October launched an attack on a house in Barawe targeting a top Shabab commander, but were fought off with several U.S. Navy SEALS believed to have been wounded.

Al-Shabab is fighting to topple Somalia's internationally-backed government and regularly launch attacks against state targets, as well as in neighboring countries that contribute to the AU force. On Sunday, al-Shabab carried out a car bomb and firefight against an intelligence headquarters in the capital Mogadishu. At least seven Shabab fighters and five others were killed. The fighting comes as the U.N. and aid workers warn that large areas of Somalia are struggling with dire hunger and drought three years after famine killed more than a quarter of a million people. A U.N. assessment reports released Tuesday said over 1 million people are struggling in conditions close to famine.