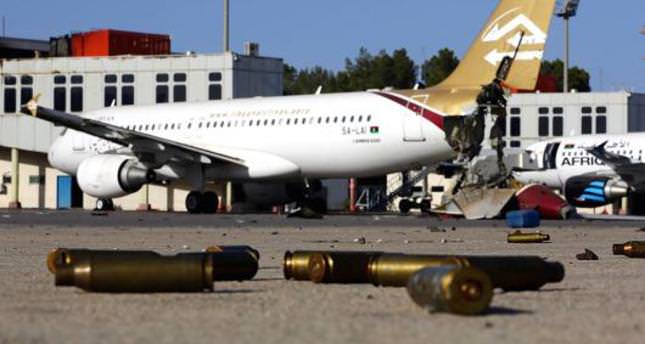 by Daily Sabah Sep 04, 2014 12:00 am
A total of 11 commercial aircraft from state-owned carriers Libyan Airlines and Afriqiyah Airways that went missing in August from the Tripoli International Airport have now come under the control of a Libyan militant group called the "Dawn of Libya." This would also prompt fears of another 9/11 style attack in the region, noting the second anniversary of the attack on the U.S. embassy in Libya on Sept. 11, 2012.It is claimed that these 11 missing aircraft could pave the way for the militant group to launch deadly attacks in the region.

Libyan militants from the group Dawn of Libya released photographs online showing that some of the aircraft are now under their control. They can be seen smiling in the photographs; pictures considered clear evidence of an impending security threat.
During the tragedy of Sept. 11, 2012, four Americans, including the U.S. Ambassador Christopher Stevens, were killed in a raid on the U.S. ambassador's compound in Benghazi, Libya. U.S. officials held the Libyan militant groups Ansar al-Shariah responsible for the Sept. 11 attack on the U.S. embassy.

The U.S. embassy in Tripoli has been shut down since late July due to growing security concerns. The U.S. evacuated its entire diplomatic staff due to the deteriorating situation in the capital city. The Dawn of Libya militia group reportedly seized the evacuated U.S. embassy residential compound after taking it over from rival militias.

Meanwhile, in the absence of any political authority and governmental instability, Libya has been dragged into political chaos since the fall of the long-ruling dictator Moammar Gadhafi. The Libyan government has long been at the mercy of rogue brigades as the central government has not had enough power to gain control over its territories. In the capital city of Tripoli and the second largest city of Benghazi, the rival militant groups have been continuing to fight in order to seize control of key installations, especially the two airports, the top targets for both brigades that would give them a greater control over strategic points.