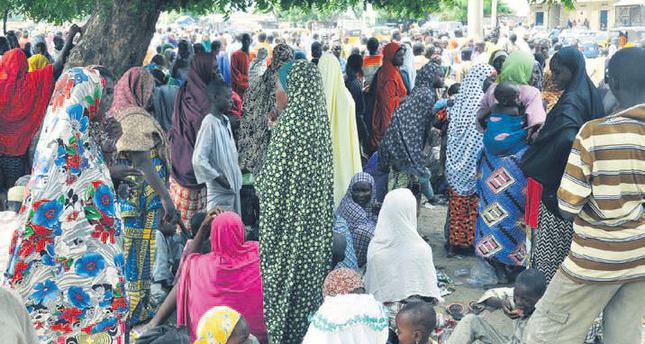 by AA Sep 04, 2014 12:00 am
Nigeria's Boko Haram militant group has reportedly seized Bara, the second town in the northeastern state of Yobe that is now held by the insurgents who had earlier captured Buni Yadi, said local residents on Wednesday. "Yesterday, Boko Haram militants effortlessly took over Bara, which is the headquarters of the Gulani local government council, although nobody was harmed," Ndagi Abass, a resident who had fled Bara alongside several others, told Anadolu Agency (AA). "They drove around with confidence in their many Hilux vans. They now occupy the local government offices with no challenge from anyone. They ask us to come to join 'the work of God they are doing.' They asked us not to panic," Abass told AA from Damaturu where he fled to overnight.

Joseph Adamu, who worked at the council headquarters, confirmed the capture of the town by Boko Haram. "Bara has fallen to the terrorists who, with their AK-47s worn around their necks, are asking people to join them. We sense that they could embark on forceful conscription if more and more people continue to reject them, and that is why we ran away," Adamu told AA.

He said most parts of the state are already deserted "because there is just no guarantee of any safety from anywhere." Buni Yadi, a major town of Yobe - a state bordering the Boko Haram-wrecked Borno state - had earlier fallen to the Boko Haram insurgents.

It is not clear if they have extended their "Islamic caliphate" to the two recently-captured towns. "Half-dressed in military fatigue and mufti, they gather people to listen to their preaching. Before doing that, they make the call to prayer.

They are that emboldened," Adamu said. While the status of Bama town in Borno remains unclear as insurgents battle troops for its control, Boko Haram's control of Gwoza, Buni Yadi and Madagali in the state of Adamawa has been established, with the military struggling to dislodge them. The group's elusive leader, Abubakar Shekau, recently declared all territories under Boko Haram's control to be part of an "Islamic caliphate" in northern Nigeria.

The Nigerian military, for its part, has dismissed Boko Haram's claims, insisting that no part of the country had or would be conceded to the militant group. Since May of last year, the three states - Borno, Yobe and Adamawa - have all remained in a state of emergency, imposed by the government with the stated aim of curbing the Boko Haram "menace."

Boko Haram, which means "Western education is forbidden" in Nigeria's local Hausa language, first emerged in the early 2000s preaching against government misrule and corruption. The group later became violent, however, after the death of its leader in 2009 while in police custody. In the five years since, the shadowy sect has been blamed for numerous attacks - on places of worship and government institutions - and thousands of deaths in Nigeria.