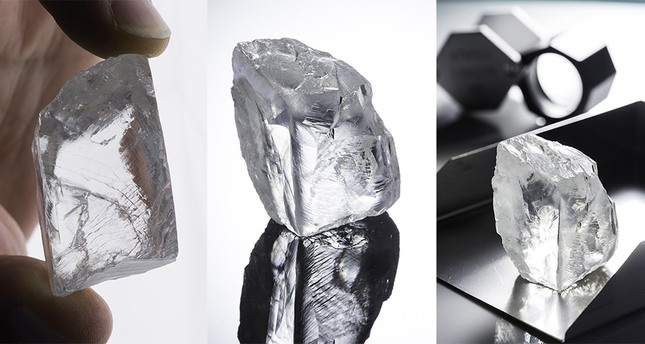 Shares in the diamond miner, which operates primarily in South Africa, climbed as much as 7 percent to a high of 189.2 pence in early trading, the biggest rise on Britain's FTSE 250 Midcap Index on Tuesday.

The Cullinan mine is famed for the largest rough gem diamond ever recovered, the 3,106 carat Cullinan Diamond found in 1905, which was cut into stones that are part of Britain's Crown Jewels.

The recent find is Petra's largest white diamond since it unearthed the 507-carat Cullinan Heritage in 2009 from the same mine. That rough white diamond was given a "flawless" clarity grade and fetched $35.3 million, a record price for the company.

"We estimate a sales price in the order of $10 million to $15 million, given Gem Diamonds' recent sale of Type II white at about $70,000 per carat and assuming some losses for cutting/polishing," Numis Securities analysts said in a note.

"The extra revenue would go straight to the bottom line", Numis said.

Petra, which reported revenue of about $473 million in the previous financial year, declined to specify how much the diamond could fetch.

A company spokesman told Reuters the stone would most likely be snapped up by a buyer from traditional diamond hubs such as the United States, Europe, Israel or China, who could cut the stone into polished gems.

"It's more a case of the clients coming to us, rather than us needing to approach clients," he said.

Petra said it expected the diamond, that has no measurable nitrogen impurities to be sold in October-December, the second quarter of its financial year.

Investors are also awaiting the outcome Petra's sale of a rare 122.52-carat blue diamond recovered from Cullinan this year. Analysts have pegged the stone's value at more than $35 million. The sale period closes on Friday.

The miner, with five producing mines in South Africa and one in Tanzania, sold a 29.6 carat blue diamond to U.S. luxury jeweller Cora International in February for $25.6 million.

Petra has in the past year retrieved some large blue diamonds from Cullinan, which was one of the five non-core mines it bought from Anglo American Plc's De Beers unit - the world's biggest diamond producer by value.