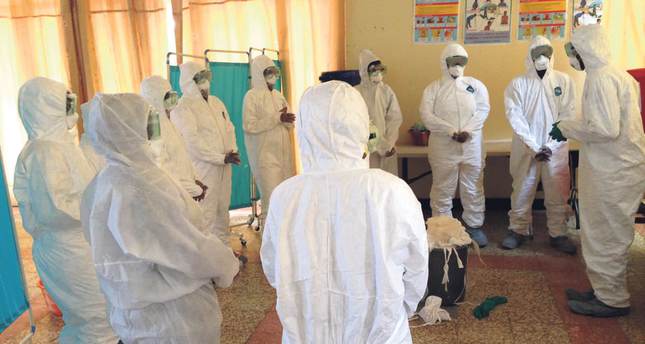 by Sep 11, 2014 12:00 am
Some of the world's most gruesome diseases are finally getting a bit of attention.The worst-ever Ebola outbreak, which has already killed at least 2,296 people in West Africa, has triggered a scramble to develop the first drug or vaccine for a deadly disease that was discovered nearly 40 years ago in the forests of central Africa. But Ebola is not the only tropical disease without a cure, and many other infections for which effective treatments are lacking or not widely available afflict far larger populations. The absence of economic incentives for drug makers to develop and supply medicines for neglected tropical diseases (NTDs) has long been highlighted by health campaigners, but it rarely gets on to the political radar in the West. Out of 336 brand-new drugs approved for all diseases between 2000 and 2011, only four, or 1 percent, were for such conditions - three for malaria and one for diarrheal disease, according to a study published in The Lancet journal last year. The pipelines is also thin, with just 1 percent of clinical trials under way around the world focused on NTDs such as rabies, sleeping sickness, leishmaniasis, elephantiasis, trachoma and other parasites that maim, blind and kill millions.

The Ebola outbreak now ravaging West African communities could change those statistics as biotech firms and pharmaceutical companies, spurred on by government funding, fast-track drug development programs. "This will draw more attention to Ebola and (neglected) diseases like it, because this is the first time we've seen an outbreak of this magnitude," said Chris Elias, head of global development for the Bill & Melinda Gates Foundation, which has just pledged $50 million to fight the epidemic.

It is not that scientists don't have ideas for new drugs and vaccines but, until now, they have lacked the industry buy-in needed to take experimental products through the costly late stages of clinical development.

Significantly, much of the funding for Ebola has been driven not by concerns about sporadic outbreaks in Africa but by a biodefense strategy in the United States and other countries fearful of the potential to weaponize the virus. There are signs that the threat from neglected diseases is now moving up the agenda but efforts remain woefully inadequate, according to Jean-

Herve Bradol, a former president of Medecins Sans Frontieres who leads research at the group's CRASH Foundation research center and who co-wrote the Lancet paper. "Unfortunately, we need a major frightening epidemic in a highly developed country to make world leaders understand that they cannot keep on neglecting these infectious diseases," he told Reuters. "The neglect has been so long-lasting that if we want to catch up we need much more than a slight improvement." Bradol said clinical tests on Ebola vaccines - now under way for a shot from GlaxoSmithKline and planned for others from NewLink Genetics and Johnson & Johnson - could have been conducted on healthy volunteers far earlier. But Ebola has simply not been a priority.

Past outbreaks, while frightening, have killed relatively few people and there have been no recorded Ebola deaths in 22 out of the last 38 years. The disease does not even figure on list of 17 priority NTDs drawn up by the World Health Organisation (WHO) in 2012 that together threaten more than 1 billion people worldwide. WHO Assistant Director-General Marie-Paule Kieny, a leader in today's Ebola battle, says there has simply not been enough investment in the development of drugs against multiple diseases affecting poor people in poor countries.

In a bid to break the logjam, 13 pharmaceutical companies joined the WHO and the Bill & Melinda Gates Foundation at the start of 2012 in a pledge to eradicate or control 10 NTDs by 2020, in part by increased donations of medicines. There has also been a modest increase in NTD research funding, up 3 percent in 2012 to $3.2 billion after several years of decline, according to the latest annual survey from the group Global Funding of Innovation for Neglected Diseases.

Contributions from governments and charities dominate, with drug makers chipping in just $527 million - a tiny part of the industry's overall $70 billion research spend - and most of that industry money is targeted at diseases like dengue, malaria and tuberculosis with some commercial upside in the West. Among individual firms, GSK and Sanofi lead the pack, each investing more than $100 million a year on tropical disease research, according to a Deutsche Bank analysis.