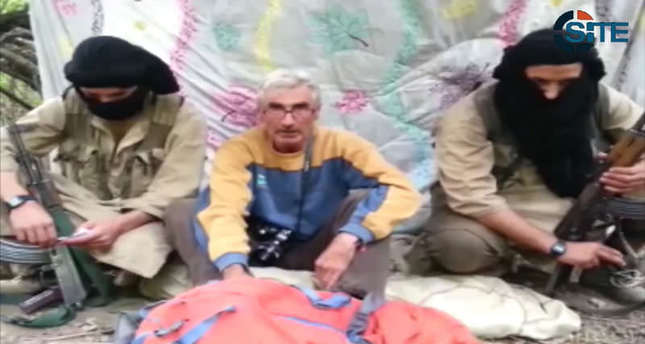 by Daily Sabah with Agencies Sep 24, 2014 12:00 am
Jund al-Khalifa, which declared its obedience to the Islamic State of Iraq and al-Sham (ISIS), released a video showing the execution of the 55-year-old French citizen Herve Pierre Gourdel who was in Algeria as tourist. The video, entitled "Blood Message to France," apparently showed the abducted French national Gourdel kneeling before four armed men with his hands bound behind his back and staring at the ground, reported French TV channel BFMTV on Wednesday. His abductors then read a script announcing he would be killed, wrestled him to the ground and placed a knife at his throat. The video then cuts to an image of his decapitated body, and shows the captors holding his severed head.

The Jund al-Khilafa group, claiming to be affiliated with ISIS, had issued a video on Monday threatening to execute Gourdel within 24 hours, if French President François Hollande failed to stop military operations in Iraq against ISIS. Hollande confirmed French hostage Herve Pierre Gourdel's assassination by a militant group in Algeria claiming to be affiliated with ISIS. Hollande's comments came on Wednesday after the Jund al-Khilafa group broadcast the video of Gourdel, who was kidnapped over the weekend in Tizi-Ouzou, north central Algeria. Speaking in New York where he was attending the 69th session of the U.N. General Assembly, Hollande said that Gourdel had been "cruelly murdered." He said: "Gourdel was killed because he is French and France is fighting against ISIS."

"This aggression helps to reinforce our determination. We will continue to fight against ISIS. Military air operations will, therefore, continue," he added. He made a call on his defense council to hold an urgent meeting. French authorities continuously stated that they will negotiate with the group.

French Defense Minister Jean-Yves Le Drian said that Algerian forces are hunting for the murderers. "France, which has limited airstrikes so far to Iraq, would continue to evaluate whether to extend them to Syria, as the U.S. has done to thwart the extremists' advances," he said. He added that French jets were in flight even as he spoke. Le Drian told RTL radio on Thursday that the goal of the groups is to "spread terror" after he was asked about the 30,000 French citizens living in Algeria.

Flags flew at half-mast in Gourdel's home town of Nice, as residents expressed their shock at the violent end of one of their citizens. "I was very worried. I've been crying for two days," said Patrick, a friend and neighbor. The deputy mayor of the French Riviera resort, Christian Estrosi, visibly moved, told reporters that the country had been plunged into "national mourning," after he met Gourdel's relatives late Wednesday. "It is a terrible shock for the parents," he said, adding that the family had reacted to Gourdel's death "with dignity, anger and an unspeakable pain."

The Jund al-Khilafa group broke away from al-Qaida in the Islamic Maghreb (AQIM) last week and pledged allegiance to ISIS.