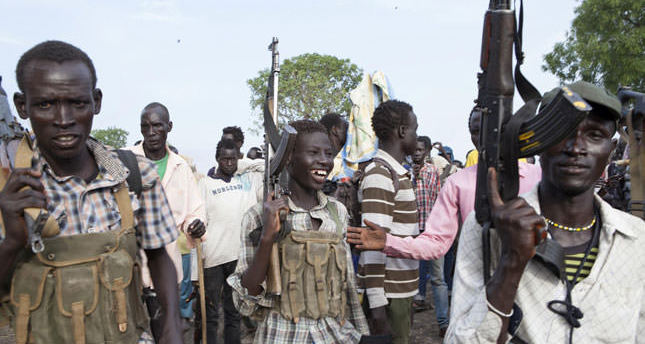 by AA Sep 26, 2014 12:00 am
The number of children currently fighting with South Sudan's warring parties has skyrocketed to nearly 10,000, according to a United Nations Children's Fund (UNICEF) official based in the troubled country. "Over the last few months and weeks, we have been getting more and more information," Fatuma Ibrahim, UNICEF chief for child protection in South Sudan told Anadolu Agency (AA). She lamented that child recruitment had been stepped up despite a promise earlier this year by the warring factions to stop recruiting children and to demobilize those already in their ranks.

"Now the figures have reached 10, 000 … around 70 percent or so are [with] the white army, where thousands of these youths are being recruited," Ibrahim said in reference to Riek Machar's rebel forces. "We share directly with the government; they are the ones to release it [the figures]," she added when asked about the number of child soldiers thought to be serving in the army's ranks.

South Sudan has been shaken by violence since last December when President Salva Kiir accused Machar of plotting to overthrow his regime. Hundreds of thousands of South Sudanese have since been displaced in fighting between the two rivals, leading to an increasingly dire humanitarian situation for large swathes of the country's population.

In recent months, the warring camps have held on-and-off peace talks in Addis Ababa under the auspices of the Inter-Governmental Authority on Development (IGAD), a Djibouti-based regional bloc. UNICEF's Ibrahim said the Juba government was in the process of demobilizing children from the army, but added that more still needs to be done on the ground. "With the government, there is a process; there are structures [and] systems that we are using," she noted. "The way the defense minister has … been involved in this, this time around, we believe the commitment is there," she asserted. "Our concern now is at the ground level, where these children are," she explained. "It started up here, but we need to … hold commanders who have children in their ranks accountable." The UNICEF official was less optimistic regarding South Sudan's rebel camp. "We have a challenge with the SPLA-in-opposition," she told AA. Ibrahim cited a commitment made by Machar in May in the Ethiopian capital Addis Ababa.

"We also know that he sent directives to his commanders not to recruit children," she added. "The reports we have received from the ground, some of which have really been verified, are that recruitment [and] forced recruitment is going on," the UNICEF official fumed. "Again, we have a commitment at the high level; ground level is a completely different thing," she said. "When some of our partners and colleagues talked to some of these commanders, they said they needed to get directives from higher commanders on the ground – not from Machar," Ibrahim added. She said UNICEF and its partners were looking at the possibility of directly engaging rebel commanders on the ground. "It's going to be harder, more laborious – but something has to happen," she asserted. "Somebody has to raise a voice."

Ibrahim said they were also engaging people at the community level with a view to stopping the recruitment of children. "Now we are focusing on advocacy and the use of children at the national level with the minister of defense and at the local level working with parents [and] children," she told AA. "In fact, in Leer [a small town in Unity State] at one point there was this mass mobilization," the UNICEF official recalled. "Children themselves just disappeared because some of them did not want to go." Ibrahim noted that the government still had a problem dealing with the demobilization of child soldiers from several armed groups that have already denounced Machar's rebellion. "The biggest one is the SSLA [South Sudan Liberation Army] in Bentiu [a town in Unity State]," she said. "Last year, we knew the SSLA had between 200 and 300 children [serving within its ranks]."