What is next for Nigeria’s Boko Haram? 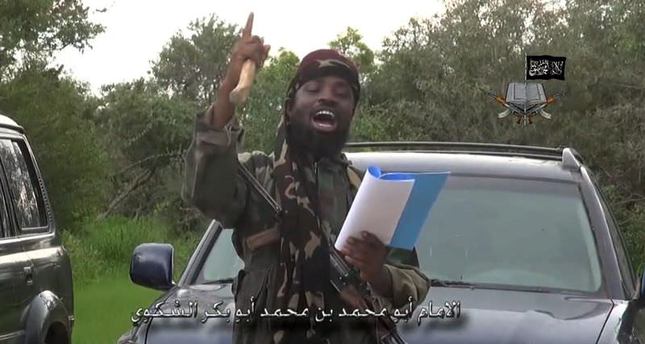 Nigerian army claims that it is raiding Boko Haram and has killed its top leaders. Yet, Nigerians who are weary of endless attacks and conflict seem to believe the group cannot be eradicated from the country

For many Nigerians, whether the person the Nigerian army recently killing Boko Haram leader Abubakar Shekau or an impersonator of the man already dead does not make much difference. The announcement simply means the person who terrorized Nigerians in recent videos is no longer around. The focus now is how much this will affect the dreaded group, which has in recent weeks overrun several towns in northern Nigeria and declared them part of an "Islamic caliphate." "It may be too early to celebrate," Ahmad Abdullahi, a security analyst, told Anadolu Agency (AA). "We heard this same news two times in the past, and Boko Haram not only refuted it, it upped its violent activism." The Nigerian army announced on Wednesday that it had killed Mohammed Bashir a top Boko Haram commander it claimed had been impersonating the group's "deceased" leader in recent videos. The announcement suggested two things. Firstly, it upheld the long-held position of the secret police - that Shekau was dead after the military high command had long avoided the question of Shekau's death.

Secondly, it asserted that Shekau had a lookalike, who had been impersonating him since he was killed. That impersonator, Bashir, has now been killed, according to the army statement. But beyond the question of Shekau's death is the bigger issue of what will happen to the group after his purported death. "The future of the insurgency cannot be predicted, even though gains appear to be recorded," Abubakar Mu'azu, a researcher on the five-year-old insurgency, told AA. "The military is simply repelling and not organizing attacks to rout out the insurgents," he suggested. "So if repelling is the only strategy being used, then it's hard to imagine a quick end to it." In recent weeks, Boko Haram militants have overrun several towns across Nigeria's restive northeastern region.

In a recent video, Shekau - or rather his impersonator - declared all territories under the group's control to be part of an "Islamic caliphate" in northern Nigeria. Over the past five years, Boko Haram has terrorized Nigeria's northeastern region, killing thousands of people and destroying numerous businesses. Boko Haram, which means "Western education is forbidden" in Nigeria's local Hausa language, first emerged in the early 2000s preaching against government misrule and corruption.

In the five years since, the group-outlawed by Nigeria, Turkey and the U.S. has been blamed for numerous attacks on places of worship and government institutions and thousands of deaths. An estimated six million people have been displaced in the region as a direct result of the violence. David Iyajon, a security analyst, said Boko Haram, like other criminal gangs, was a symptom of a "failed state."

He insisted that the only solution was to address the insurgency's root cause. "Like headache and catarrh, terrorism is a symptom," Iyajon told AA. "So I call Boko Haram a symptom of our failed institutions; a sign that we have failed as a people. "Boko Haram is just slightly different from other criminal gangs manifesting themselves in ethno-religious ways," he said. "It is not enough to kill Shekau or his lookalike. What is needed is to understand the crisis," the expert asserted. "What you call religious fanaticism is really a reaction to state policies. "Have we been fair to our people in terms of giving them education that gives them a start in life? Have we provided basic things that make crime less attractive?" Iyajon asked. "For Nigeria, the answers are a big 'no.' Maybe we should start from there."

Arinola Grace, a doctoral student at the sociology department of the University of Lagos, agrees.

"We shouldn't just be tough on Boko Haram or cultism, kidnapping and urban violence, we should be tough on the causes of such crimes," he told AA. "We have heard instances where Boko Haram recruited young men with just a promise of three square meals [a day]," Grace said. "What this suggests is that people are hungry. We should critically examine societal problems that make young men or women easy prey to such crimes," he said. Grace went on to cite unemployment, waning moral values, declining parental responsibility and a decaying educational system. "We must never give anybody the impression that crime pays," Alabi Alo, a public commentator, told AA. "But this is what we do here in Nigeria. Militants who wage war against the state are now multibillionaires," he said. "Such an attitude encourages crime."

Since 2009, three star-studded committees have been set up to "look into" the root causes of the insurgency, with each issuing its own set of recommendations. "We don't even know the contents of these panel reports to begin with," civil rights activist Yinusa Yau told AA. "The government doesn't appear serious, and this lends credence to claims that some politicians could be benefiting from the crisis," he said. Most of the committees recommended massive investment in social infrastructure and social security in an effort to win the hearts of the people. Successive governments have also been criticized for perceived insincerity and corruption, which, the committees found, have tended to hurt their credibility. For instance, many have questioned how massive financial allocations to the security sector have not translated into better equipment or morale for the troops fighting Boko Haram. The committees have reportedly been unanimous in their calls for a tough stance against crime and for the prosecution of anyone found to have committed serious violations. "Let the government make these panels' findings public, and let them act on them," Yau said. "Let us begin from there."